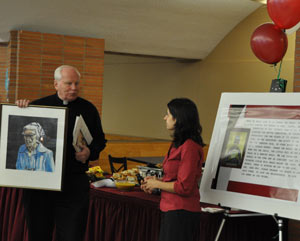 To better express its goals and mission, the Community Service Program at Fordham has renamed itself in honor of Dorothy Day, one of American Catholicism’s foremost social justice leaders.

The program officially changed its name to the Dorothy Day Center for Service and Justice in a ceremony on Oct. 16 at the McGinley Center on the Rose Hill campus.

“Dorothy Day touches all who know her story,” said Monsignor Joseph G. Quinn, J.D., J.C.L., vice president for mission and ministry at Fordham. “Through her inspiration, I hope that we will continue to become—as we have said so often—women and men for others.

“If we see in Dorothy Day an example of that being fully lived, all the more reason to be inspired.”

Sandra Lobo Jost (FCRH ’97), director of the center, said the name was changed because the term “community service” has come to signify charity work generally, or court-ordered work that people perform to avoid prison.

“While charity work is one way to help improve communities, the focus of our efforts lies in justice-oriented work,” Lobo Jost said.

Balloons, posters and candles lent a festive air to the renaming ceremony, which was held in the Ramskeller and attended by campus ministry and Day Center staffers.

The posters featured famous quotes from Day, such as: “Love casts out fear, but we have to get over the fear in order to get close enough to love,” and “It is people who are important, not the masses.”

She noted that the center was organizing special “midnight runs” to distribute food to the homeless as part of a week of activities organized to celebrate the name change.

“Day was committed to direct service of the homeless by providing shelter and food. At the same time, she was outspoken against the larger societal systems that kept people poor and oppressed,” Lobo Jost said. “Finally, she was able to do her work because of her strong faith as a devout Catholic.

“All of our work at the center is framed in the faith that does justice.”

Joseph Currie, S.J., director of campus ministry and associate vice president of mission and ministry, donated to the center a portrait of Day painted by Father Geoffrey Gneus, the Dominican chaplain who presided over her funeral and who visited Fordham in 1997.

Father Currie also read a quote from Gneus’ eulogy at that funeral.

“The Sermon on the Mount, the one from the 25th chapter of St. Matthew: ‘When I was hungry, you fed me. When I was thirsty, you gave me something to drink. When I was sick or in prison, you came to visit me.’ These were the cornerstones of [Day’s] movement, and it’s not some general guide or optional outline,” he said. “It is the very expression of the flesh and blood of Jesus and the incarnation of truth.”