skip to main content
Return to Fordham University
You are at:Home»Inside Fordham»Seeking Catholic Subtexts in Shakespeare

In an inaugural lecture of the Hobart-Ives Series on April 16, independent scholar Clare Asquith, the countess of Oxford and Asquith, drew a connection between England’s rupture with the Catholic Church and Shakespeare’s texts.

Asquith said she derived inspiration for her talk, “Shakespeare and the Image of Holiness,” while her husband was a diplomat in Russia during the Cold War. She noticed anti-communist allusions being directed into classic plays, such as in the works of Anton Chekhov. 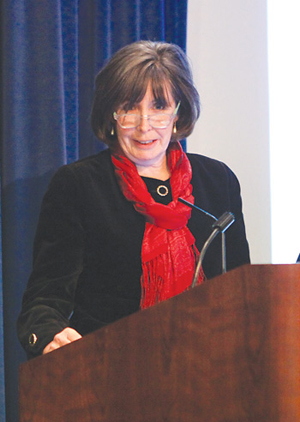 Despite her 20th-century inspiration, Asquith said that if scholars of Shakespeare approached his texts “by looking forward from the Middle Ages rather than backward from the 21st century” they would find a similar subtext—in this case a coded commentary on Catholics living under the tyranny of England’s Reformation.

“Shakespeare wrote at a time when the subject of religion was prohibited on the stage in England,” said Asquith.

Nevertheless, touches of “Catholic holiness” pop up in the most unexpected ways, she said. She noted that Shakespeare often used the “discarded language of medieval piety,” which was associated with Catholicism and was banned.

Citing certain scenes in his plays that “can only be described as the actual experience of holiness itself,” Asquith argued that Catholics could not fail to recognize ritualized motifs in the language. She cited, for example, the final act in The Merchant of Venice, when Lorenzo and Jessica repeat the phrase “In such a night,” which Asquith noted occurs the same number of times as the very similar phrase Haec nox est in the Exultant prayer.

Asquith argued that examples of holiness were not merely decorative, but were “insistent pointers to what lies within … a buried layer of meaning in which the concept of holiness takes on physical forms and is actually embodied in certain characters.”

“‘Divine’ Desdemona (wife of Othello) has distinctive Catholic attributes, and is associated not just with the chaste bride of Christ, but with the figure of Mary, the mother of God,” she said.

Asquith said Cassio’s praise of Desdemona has the distinct ring of the rosary: “Hail to the lady!/And the grace of heaven/Before, behind thee, and on every hand,/Enwheel thee round!”

Desdemona is not alone among the “peerless brides” representing Christ’s Church in Shakespeare’s plays, she said. She found six, including Lavinia in Titus Adronicus, whose chopped-off hands and cut-out tongue parallel the mutilation of the statues of the Virgin, which were vandalized in much the same manner at the time.

In closing, Asquith shifted her attention from Shakespeare’s plays to his Sonnet 124, in which he “commits unequivocally and personally to this timeless, universal figure of holiness.” She gave a line-by-line analysis of the time-centric poem, with a particular concentration on the temporal quality of England, which had already seen four heads of state change the course of religion in the previous forty years.

“If my dear love were but the child of state / it might, for fortune’s bastard, be unfathered,” she read from the poem’s beginning. Asquith said it was Shakespeare’s way of observing that the religion of a temporal state can only be temporal.

“Perhaps, given the occasional presence of red-hot political poems like these . . . it is not surprising that the sonnets ran to just one edition,” she said, also noting that the sonnets had been published by Thomas Thorpe, a controversial figure who held “shadowy connections with the leader of the English Jesuits.”

“However harmless the portrayal of the beautiful, holy, universal bride may seem to us now, when Shakespeare staged [his characters]for the court, he was playing with fire,” she said.
The Hobart-Ives lecture series focuses on contemporary Catholic thinkers in a pluralistic society.