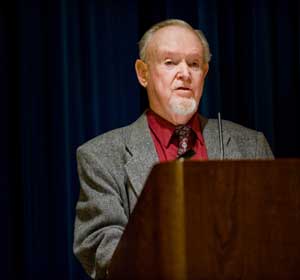 The best way to honor Martin Luther King Jr. is to continue the struggle for equality, peace, justice and a non-violent world, a civil rights pioneer said on April 3 at Fordham University.

“We may wonder what Dr. King would be saying today, at this critical time in the history of our own country and the world post-9/11,” said George M. Houser, a Methodist minister and civil rights activist. “Of course we cannot know. But we do know his message and his action would promote peace and non-violence.”

Houser, who helped organize the “Journey of Reconciliation” in 1947 to challenge racial segregation on interstate buses, was one of three speakers to discuss King’s legacy at a screening of the documentaryKing: A Filmed Record…from Montgomery to Memphis. The event was hosted by the Department of Theology to mark the 40th anniversary of King’s assassination.

D.B. Walker, Ph.D., assistant professor of Africana studies at Brown University, spoke on King’s political theology. Richard Kaplan, associate producer of the documentary, released nationally as a special fund raiser for one night only in 1970, discussed how the three-hour film came together.

“One of the wisest decisions we made was to have no narration whatsoever,” Kaplan said of the film, which features footage from vintage newsreels and many of King’s speeches.

Christophe Chalamet, Ph.D., assistant professor of theology, said the film allows viewers to listen at length to King himself.

“We don’t honor the man if we don’t listen to him,” Chalamet said.