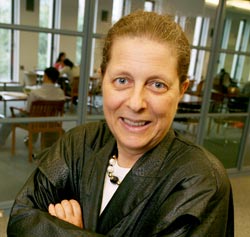 Marleen Barr, Ph.D., adjunct professor of communication and media studies at Fordham, will travel to the University of Dortmund, Germany, this spring on a Fulbright lectureship, her third. She is one of the foremost feminist critics of science fiction in the country; a published novelist (Oy Pioneer! University of Wisconsin Press, 2003); has four full-length scholarly books and numerous critical anthologies and articles to her credit; and is the Science Fiction Research Association 1997 Pilgrim Award winner for lifetime achievement in science fiction criticism.

“I met Marleen Barr during the early days of the International Association for the Fantastic in the Arts Conference and enjoyed her wit and dedication to the idea that fantastic literature should be taken just as seriously as the then-canonical literary realism,” said Mary A. Turzillo, emeritus professor of English, Kent State University, and winner of the Nebula Award for her 1999 novelette, “Mars Is No Place for Children.” “Her point of view was not popular in the dusty halls of elder academe at the time, and she showed unflagging courage in supporting what she believed.”

James Gunn, emeritus professor of English and director of the Center for the Study of Science Fiction at the University of Kansas, Lawrence, started writing science fiction in 1948, and has published 100 stories and 28 books. Gunn’s master’s thesis was serialized in a pulp magazine, and he is past president of the Science Fiction Research Association. If any writer and academic in science fiction and its study can be called a member of the Old Guard, it’s Gunn. Yet he’s collaborating with Barr, one of the feminist pioneers of science fiction studies, on a textbook, Reading Science Fiction, to be published by Palgrave Macmillan. “[Barr] is probably the most prominent member of the science fiction scholarly field of feminist criticism,” Gunn said. Together with Matthew Candelaria, Ph.D., of the University of Kansas (himself a science fiction writer), Barr and Gunn are producing a textbook that combines scholarly work—written in an accessible style—with the writing of science fiction luminaries like Orson Scott Card, Gregory Benford, and Bruce Sterling.

In her book, Lost in Space: Probing Feminist Science Fiction and Beyond (University of North Carolina Press, 1993), which has a preface by novelist Marge Piercy, Barr wrote about James Tiptree, Jr. (Alice Bradley Sheldon), and her archetypal outsider story, “The Women Men Don’t See,” which Barr said has a “protagonist of substance whose presence is distorted or made invisible because people refuse to see properly.”

“Feminist SF is the best literature women can read,” Barr said, “because it offers, according to the language of critic Darko Suvin, ‘cognitive estrangement,’ seeing an alien terrain with new eyes. Feminist SF gives women cognitive estrangement from patriarchy; it acts as a blueprint for social change because women can see in it that patriarchy is a man-made system that they can break out of.”

Barr has been awarded previous Fulbright lectureships to the University of Duesseldorf, Germany, American Studies Institute, 1983-1984; and the University of Tuebingen, Germany, American Studies Institute, 1989-1990; and a distinguished scholar grant to Japan, 2000. She has had distinguished fellowships at the University of Cape Town, South Africa, 1997; and Macquarie University, Australia, 1999. Barr’s lectures at international conferences and foreign universities have been sponsored by the Academy of Finland Research Council for the Humanities, the Council for Equality Between Men and Women (under the auspices of the Finnish Prime Minister’s Office), the South African Commission for Educational Exchange, and the Japan-United States Educational Commission.

“She’s been one of the spearheads of the movement toward serious speculative and fantastic fiction studies,” Turzillo said. She’s an engaging presenter, and her scholarly output has been, as difficult as this may seem, both passionate and precise. She’s done brilliant work for gender studies both in speculative and fantastic literature and in general. When I learned she had been awarded the Pilgrim Award, I was delighted, but not surprised. The announcement of her Fulbright just reinforces that reaction.”