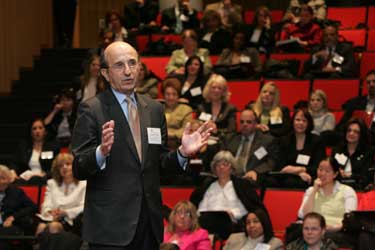 New York City schools chancellor Joel Klein told a gathering of 200 public school principals that their leadership is the most important component in the successful transformation of the city’s public school system.

Klein, who in his six-year tenure has granted more control to principals, spoke at a half-day conference on April 14 sponsored by the Graduate School of Education (GSE), “Redefining the Principalship in an Age of Accountability and Assessment.”

“What’s important about this conference is that there is a fundamentally different paradigm,” Klein said. “The most important thing that has happened in the last six years is the transformation of the role of the principal from an agent of bureaucracy to the CEO of the public school. There has been a powerful shift.”

The chancellor pointed to one failing school, Intermediate School 22 in the Bronx, which had gone through six principals before the arrival of Shimon Waronker in 2004. Under Waronker, one of the first graduates from the city’s Leadership Academy for principal candidates, the school transformed in just three years from one of the city’s 12 most dangerous to one with an “A” rating and 93 percent attendance.

“Was it a huge influx of money? No. The difference was leadership,” Klein said. “Leadership that let itself be felt and that understood that the most valuable asset in your schools are the human resources that you work with. That had a sense of mission, a willingness to forget about the rules we operate under and focus on the kids we operate for. That is what transformative leadership is about. That is doing the hard work.”

Under the new paradigm, principals can enter into empowerment school performance agreements with the Board of Education, noted Klein, for which they are eligible to receive higher salaries and achievement bonuses for improving and sustaining schools. Principals also have been given more authority over budgeting and filling certain positions within their schools, he said.

“I believe in my bones that education is a transformative thing in a child, particularly if you come from challenging circumstances or from poverty—that’s what animates the work that we do,” he said. “You are the men and women who are in the arena, and you should dare greatly.”

The conference was sponsored by GSE’s Division of Educational Leadership, Administration and Policy (ELAP), which offers a 30-credit master’s degree in school administration and supervision. The event was designed to promote discussion of the role of principals under the Board of Education’s new structures. In addition, GSE will offer a doctor of education degree in urban school leadership designed especially for New York City school leaders in the fall.

“Responsibility rests with [you]principals as has never rested with you before,” said James Hennessy, Ph.D., dean of GSE. “With that responsibility comes a new form of accountability and assessment.”