skip to main content
Return to Fordham University
You are at:Home»Inside Fordham»School Leaders Chart the Future of Catholic Education 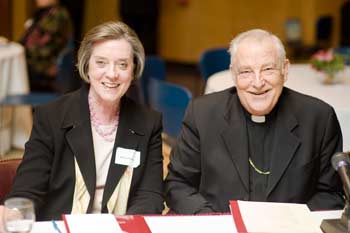 Karen Ristau, Ed.D., president of the National Catholic Educational Association, and Zenon Cardinal Grocholewski, prefect of the Vatican’s Congregation for Catholic Education, at the GSE conference.
Photo by Ryan Brenizer

Leaders of Catholic elementary and high schools gathered at Fordham to discuss the problems facing Catholic education and chart a way forward.

The panelists focused on best practices, learned about alternative educational models and traded ideas at “Educating Together in Catholic Schools,” a symposium sponsored by the Graduate School of Education.

The day opened with an address by Zenon Cardinal Grocholewski, prefect of the Vatican’s Congregation for Catholic Education. His remarks were based on “Educating Together in Catholic Schools: a Shared Mission between Consecrated Persons and the Lay Faithful,” which his office released in 2007.

The document seeks to strengthen Catholic schools during a time of great demographic shifts—among both teachers and students.

“Even as Catholic schools’ market share has declined in the past 35 years, they still provide a quality education for millions of children of various ethnic and social backgrounds,” Cardinal Grocholewski said at the May 29 event. “We are the disciples who are called on to decide if this document is to take root in our schools.”