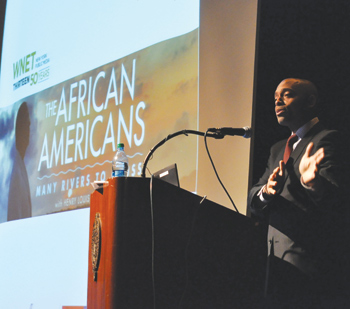 Speaking at Fordham on Dec. 17, an academic expert strongly contested the idea that African Americans should “move on” from their history and drove home its continuing importance for educators.

“The threats to black historical literacy remain with us today as they did in the past,” said Khalil Gibran Muhammad, Ph.D., a history professor and director of the New York Public Library’s Schomburg Center for Research in Black Culture.

“This notion of post-racialism—that history is no longer meaningful and impactful—actually is a very old thing. It’s an old problem” dating from the 19th century, he said.

He spoke at a professional development session for middle and high school educators, held at the Lincoln Center campus. Fordham’s Graduate School of Education, School of Professional and Continuing Studies, and others co-sponsored the event with WNET New York Public Media to show how classroom lessons might be enhanced with materials from a recent PBS series, The African Americans: Many Rivers to Cross, with Henry Louis Gates, Jr.

Describing the idea of post-racialism, he cited one African American’s assertion, posted online, that it’s “time to move on” because Jim Crow laws and the civil rights movement have receded into the past. “We aren’t helping ourselves by constantly looking to the past, and what our ancestors had to go through and demanding some sort of handout because of it,” the commentator wrote.

Muhammad showed something from the past that echoed the idea of a “handout”: a 19th-century flyer distorting the purpose of the Freedmen’s Bureau, established by the federal government in 1865 to assist newly freed slaves. It describes the bureau as “an agency to keep the negro in idleness at the expense of the white man” and juxtaposes a picture of a white man hard at work with a grotesque rendering of a happily recumbent black man.

“I suspect that if an image like this circulated more in our classes, amongst our seventh graders, amongst our 10th graders, that if you actually taught this period, that our political discourse would be very different,” Muhammad said.

“This is what’s been left out of the textbook,” he said. “And it’s precisely the silences that get filled in with ideology.”

Historical literacy is important for countering the ideologies of oppression that serve the interests of powerful elites, he said. “If people don’t even know to question the historical narratives that they’re being fed, then I feel like we’re all complicit in it as educators.”

Noting that President Obama’s picture graces the covers of some college-level textbooks, he cautioned that the election of the first African-American president should not bring a sense of lasting triumph.

“If we go to the Reconstruction period, we have this … immediate ascent of formerly enslaved people to the highest offices of the political landscape: fourteen in Congress, two as U.S. senators, a couple of more as governors,” he said. “And yet, by the turn of the 20th century none of them were serving anywhere in Washington, D.C., except to clean toilets and bathrooms, at least at the federal government level.