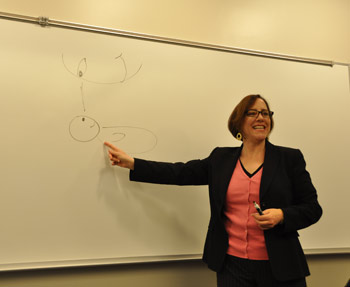 Where does spirituality come from, and how do a person’s experiences bear on its development?

A faculty panel with expertise in pastoral counseling and spiritually informed social work tackled these questions on April 13 at Fordham Westchester.

Spirituality, the transcendent feeling that occurs with a person feels connected to something larger than himself or herself, is first experienced in the gaze between infant and mother, said Lisa Cataldo, Ph.D., assistant professor of pastoral counseling at the Graduate School of Religion and Religious Education (GRE).

“Developmental psychologists talk about the ritual experience between infant and mother as the first experience that actually feels divine to the baby,” said Cataldo, a specialist in psychology and religion. “So the mother is the first God, and what could be more ordinary than that?”

It is, in fact, the ordinary, everyday experiences mediated through the human body—including its psychological makeup—that put people in touch with the spiritual thing larger than themselves, Cataldo said.

The panel discussed Descartes’ rationalist idea that reason is based on existing knowledge, independent of any sense experiences. Zulema Suárez, Ph.D., an expert in spiritually informed social work, recounted her inability to find spiritual fulfillment through traditional religions or through the “normal” road to success. Even though she was working as a successful scholar at the University of Michigan, Suárez said she felt so spiritually void that she “just wanted to hide.”

“I had my spiritual crisis when I was at the height of my career,” said Suárez, an adjunct professor at the Graduate School of Social Service (GSS). “I felt no integration between who I was and what I did.”

It wasn’t until she began exploring Eastern religions and meditation, she said, that she began to experience “God in everyday things.”

“Until then,” she said, “I felt like I’d only experienced the world through my head.”

Speaking on “Youth and God in the Era of Technology,” panelist Kirk Bingaman, Ph.D., assistant professor of pastoral care and counseling at Fordham, said that the spiritual development of young people today is inexorably tied to technology.

Bingaman recalled the recent string of suicides by teenagers who have been the victims of cyber-bullying, however, as examples of the “inherent dangers in cyberspace.”

“All of us can be a lot more disinhibited on the Internet,” said Bingaman, who is researching forms of therapy for “new anxiety” that stems from a high-tech society. “You can say whatever you want when someone is not there face to face.

“From a spiritual standpoint, [these incidences]raise the issue of the Great Commandment—that you will love your neighbor as yourself,” he said. “What does that mean, now, in this technological age?”

Conversely, said Bingaman, promise lies in the fact that today’s rapid-fire stream of information makes young people more aware of global events, and more “spiritually minded”—even though they are not as traditionally religious.

“They are less interested in the doctrine of original sin and much more interested in what the church is doing about poverty, racism, war, climate change and so on,” he said.
What adult generations can do to help guide young people spiritually, said Bingaman, is to listen to them.

“We should probably do more listening than talking,” he said.

The event, “Journey Inward, Journey Outward: Psychology and Spirituality,” was sponsored by GRE and GSS, and moderated by Dale Lindquist, Ph.D., director of the Beck Institute on Religion and Poverty.