skip to main content
Return to Fordham University
You are at:Home»Inside Fordham»Scholars Focus Eyes on Matisse and a Nun 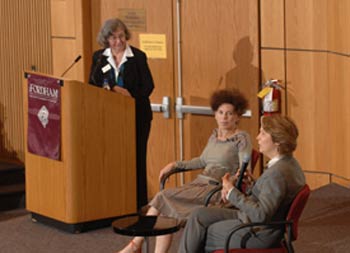 Filmmaker Barbara Freed, Ph.D., and writer Patricia Hampl, Ph.D., linked by their appreciation of artist Henri Matisse and his unlikely friendship with a French nun, met for the first time at Fordham University’s Lincoln Center campus on May 22 as part of a discussion on “A Movie and a Meditation: The Eye of Matisse, The Mystery of God.”

Hampl, author of Blue Arabesque, a Search for the Sublime (Harcourt, 2006), and Freed, director of the 2003 documentary A Model for Matisse, discussed the convergence of their two “very different” projects as part of a public forum hosted by the Fordham Center on Religion and Culture.

Hampl’s book deals with her effort to understand Matisse’s painting, “Woman Before an Aquarium,” while Freed’s film documents the little-known friendship between the artist and a French nun in the Dominican order.

“This is an unreal dream,” said Hampl, as she joined Freed onstage at the McNally Amphitheatre. “I am thrilled to be sharing the program. We each did our works without knowing about the other. I think we’re new best friends.”

Hampl, Regents Professor of English at the University of Minnesota, was inspired to write the book after a chance encounter with Matisse’s painting left her “mesmerized.” As part of her research, Hampl visited the village of Vence, in the south of France, where she met Sister Jacques-Marie, an elderly nun who had known Matisse.

Hampl’s brief encounter with Sister Jacques-Marie served as introduction to Freed’s documentary, which examines the friendship between the nun and Matisse. Freed is a professor of French studies and applied linguistics at Carnegie Mellon University.

The film features an interview with Sister Jacques-Marie in which she recounts her unique and unlikely friendship with the artist, which began when she was a nursing student and flourished after she joined the convent.

The friendship inspired them both to create the Chapelle du Rosaire in Sister Jacques-Marie’s convent. Matisse once said of the chapel, “I consider it, in spite of its imperfections, to be my masterpiece.” The chapel, still in use today, is a prominent tourist attraction in France’s Cote d’Azur region.

The Center on Religion and Culture, established in 2004, explores questions arising at the intersection of religious faith and contemporary culture. It last hosted a conversation with poet and memoirist Mary Karr. Transcripts for all of its programs are available at www.fordham.edu/ religculture.