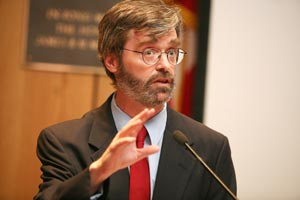 In 1643, a Jesuit priest visited the Dutch fur-trading outpost that would become New York City and reported that its population included two Catholics: a Portuguese and an Irishman.

That was the beginning of Catholicism in the city, said author and historian Terry Golway on April 23 at the 10th annual Russo Lecture. Today, the Archdiocese of New York consists of 2.5 million members, about 400 parishes and roughly 1,500 priests.

“When all is said and done, what does it mean to be Catholic in New York?” asked Golway, who moderated the event. More than 135 attendees gathered in the McNally Amphitheatre on Fordham’s Lincoln Center campus to hear three Catholic experts address that question.

“Connections that sisters made through hospitals and orphanages went beyond parish boundaries, and that went a long way in making Catholic New York,” said the evening’s first panelist, Bernadette McCauley, Ph.D., of Hunter College.

McCauley, an associate history professor and expert on the history of women religious in the city, said the unique characteristics of Catholicism and 19th century urban life led to a flourishing sisterhood that created schools, hospitals, orphanages and all manner of social support networks.

“But we have to be careful about falling into the nuns-as-corporate-managers trap,” she cautioned. “Sisters did things differently than other women who did the same work.”

The second panelist to speak, James T. Fisher, Ph.D., of Fordham, addressed the Irish nature of the waterfront on the west side of Manhattan.

Fisher, a professor of theology and co-director of the Francis and Ann Curran Center for American Catholic Studies, noted that leadership of the port diversified much more quickly than the archdiocesan hierarchy.

The Irish once controlled the entire port, but were quarantined to the West Side piers by the 1920s, while Italians, Poles and Slavs took over other sections. By contrast, the archbishop’s seat in New York has always gone to a priest of Irish descent.

Fisher described the battle between John Corridan, S.J., a labor priest who fought for the rights of longshoremen, and Joseph Ryan, president of the mafia-linked union to which all port workers had to join.

“Ryan and Corridan destroyed each other,” he said. “By the time the movie On the Waterfront came out in the mid-1950s, both men had expended their political and spiritual capital.”

Finally, journalist and filmmaker David Gibson described his efforts to chart the changes in New York Catholicism by examining one parish—St. Brigid’s on the Lower East Side. He credited the Catholic social network with turning around the largely uneducated masses of immigrants who swarmed New York in the mid-19th century.

“By the end of the 1850s, two-thirds of those seeking public assistance in New York were Irish,” Gibson noted. “At the time, mass attendance was 40 percent. Many Irish were so unfamiliar with the church that priests had to teach them about communion and confession and how to make the sign of the cross.”

The discussion, “Catholics in New York,” heralded the coming of a similarly titled exhibition at the Museum of the City of New York that will run from May 16 through Dec. 31. Each panelist contributed to a book that will accompany the exhibition.