skip to main content
Return to Fordham University
You are at:Home»Commencement»Commencement 2017»Scholars Earn Prestigious Awards to Advance Studies
UPDATE: As of May 15, Fordham students have earned 76 prestigious awards.
Though the academic year has come to an end, some of Fordham’s brightest undergraduates and graduates will be expanding their knowledge and skills through prestigious scholarships and internships around the world.

As of May 15, Fordham students earned 76 awards, including Fulbright scholarships, German Academic Exchange Service grants (aka the DAAD), and Boren scholarships.

“Fordham students have won international and national recognition, including a number of firsts: from a Newman’s Own Fellowship to a Schwarzman Scholarship in Beijing, China,” said John Kezel, Ph.D., director of the Campion Institute. “Those who have worked with the institute have a lot to celebrate.” 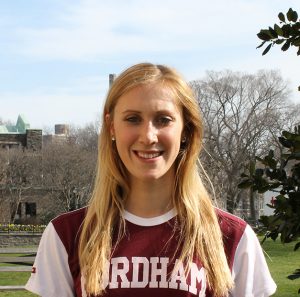 Turner Block was offered a Fulbright.

Psychology major and Fordham soccer player Turner Block’s interest in athletes and physical impairment has earned her a Fulbright fellowship at the University of Queensland in Australia.

Under the direction of Sean Tweedy, a senior lecturer of physical activity at the university and principal investigator of its International Paralympic Committee Classification Research Partnership, an accredited classifier in Paralympics Athletics, Block will explore mental barriers and facilitators that influence athletic identity in Paralympic swimmers who have moderate to severe cerebral palsy. The research will have “ramifications for rehab,” she said.

“I’ve seen how being injured can really impact your mentality. This research will give athletic identity the weight that it deserves.”

Gabelli School of Business alumna Ran Niu is one in a select group of students who were awarded a Schwarzman Scholarship, which trains future leaders about China’s expanding role in global trends. Niu, who graduated last year with a master’s degree in global finance, said working in international affairs has long been her goal, having interned in United Nations’ Regional Commissions New York Office. She is Fordham’s first Schwarzman scholar.

“I was attracted by its vision of ‘global leadership for the 21st century.’ As an international student who has studied and worked in New York City, I feel connected to this global vision,” she said.

In August, she will enroll at Schwarzman College, a new institution that is part of Beijing’s prestigious Tsinghua University, with the goal of earning a master’s degree in global affairs. 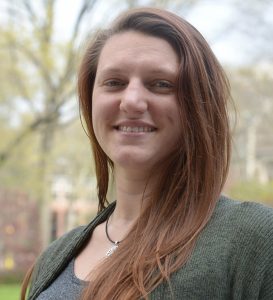 As China’s foreign policy evolves, Critical Language Scholarship winner Robyn Emory said acquiring an understanding of both the language and culture could have real-world applications, especially in government. As an undergraduate at the University of Arkansas, Emory visited China while studying abroad. She has been studying Mandarin Chinese for about eight years. Through an eight-week intensive program in Xi’an, China at Shaanxi Normal University, the International Political Economy and Development (IPED) graduate student hopes to develop proficiency in the language.

“I’m trying to use my economic and political knowledge to see where conflict can come in and where it can be avoided,” said the former Peace Corps volunteer. “It’s going to take studying Chinese to understand the full side of things.”

As Critical Language scholars are paired with Chinese roommates, she is excited to engage with native speakers on a personal level.

“Having done Peace Corps and lived overseas before, I know that the cultural aspect is just as important as the language,” she said. 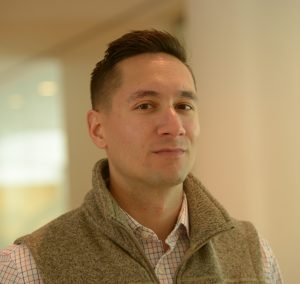 Aaron Kristopik was offered an internship with the U.S. Department of State and a Boren Scholarship.

This summer, Aaron Kristopik, an international political economy major in Fordham’s School of Professional and Continuing Studies, will be working in the economics department of the U.S. Embassy in Ukraine as part of a distinguished internship with the U.S. Department of State.

Prior to coming to Fordham, Kristopik served in the Marine Corps for close to eight years. During that time, he worked as a guard for multiple U.S. embassies, including the U.S. Embassy in Nouakchott, Mauritania. While in Africa, the New Britain, Connecticut native provided security during the 2010 Palestinian-Israeli peace talks in Egypt, he said.

As “fake news” and right-wing populism rises in Europe, Kristopik said he is hoping to learn how these changes will impact U.S. relations with Eastern European countries like the Czech Republic and Ukraine.

“There’s a lot going on in Central and Eastern Europe and it sparked my interest,” he said. “If you can understand their mindset, culture, language, and the norms of their country, it makes it more beneficial for building relationships.”

In addition to earning a Department of State internship, Kristopik has also been offered a Boren Scholarship in Czech Republic.

Kezel said the institute is investigating new fellowship opportunities all the time, and that he’d like to “see more alumni take advantage of all that our office has to offer.”

As of May 15, other prestigious scholarships won this year include:

One Newman’s Own Fellowship:
Shannon Kelsh, FCRH ’17, to work with the Women’s Business Development Center in Chicago.