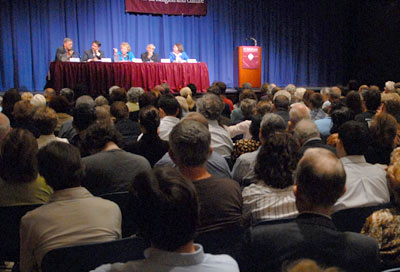 Experts in international affairs discussed the morality of withdrawing American troops from Iraq in front of a packed audience at Pope Auditorium on the Lincoln Center campus.
Photo by Leo Sorel

Four specialists in ethics and international affairs presented contrasting views on America’s moral responsibility to Iraq and its people at a public forum organized by the Fordham Center on Religion and Culture.

The standing-room-only event, “Exit or No Exit: Morality and Withdrawal from Iraq,” took place on Sept. 18 at the Lincoln Center campus.

Although sharply disagreeing about the justification for the war and its execution since the invasion in 2003, the panelists conceded that withdrawing from the war-ravaged country raised new—and perhaps insoluble—issues about the United States’ moral responsibility for Iraq and its people.

Quoting Anthony Cordesman, a Washington defense expert, moderator Trudy Rubin, foreign affairs columnist atThe Philadelphia Inquirer, opened the discussion by saying that the United States would “ultimately be judged more by how it leaves Iraq and what it leaves behind.”

Rubin questioned “what is the responsibility of a nation that . . . leaves such a fragmented system that there is no clear leadership?”

The event, co-sponsored by the Joan B. Kroc Institute for International Peace Studies at the University of Notre Dame, was a follow-up to a 2005 conference that focused on the just-war principles that should govern when and how the United States pulls out of Iraq.

At the September forum, panelist Sohail Hashmi, Ph.D., an expert in Islam at Mount Holyoke College, called the U.S. invasion of Iraq “folly” and urged swift withdrawal. Continuing the occupation, Hashmi said, has only succeeded in creating a higher risk of nuclear proliferation in the Middle East and expanding Al Qaeda’s network.

“This is a war we cannot win for the Iraqis,” he said.

The United States should approach an exit policy, he said, with “moral humility rather than the moral extravagance of the sort that we have seen in the past few years in attempting to rebuild Iraq.”

In contrast, Gerard F. Powers, J.D., director of policy studies at the Kroc Institute, cautioned against an immediate pullout of U.S. troops, making a distinction between the “ethics of intervention and the ethics of exit.”

Whether the invasion of Iraq was right or wrong is worthy of debate, he said, but the United States assumed legal and moral responsibility when it sent in the troops.

“What the U.S. owes Iraqis is akin to what the U.S. owes its own citizens,” he said. “Our duties to the Iraqis are not all that different morally than our duties to help the people in New Orleans recover from Hurricane Katrina. . . . What we broke is still very much broken. The U.S. can no more walk away with a clear conscience than a father could abandon the mother of his illegitimate child.”

Jean Bethke Elshtain, Ph.D., Laura Spelman Rockefeller Professor of Social and Political Ethics at the University of Chicago Divinity School, said that the invasion was justified. She urged patience in Iraq and offered the contrasting examples of the United States’ continuing presence in South Korea and in Europe and the departure from Vietnam.

“We cannot lift up our withdrawal of Vietnam with any sense of dignity,” she said.
Michael Walzer, Ph.D., professor emeritus of political philosophy at the Institute for Advanced Study at Princeton University, focused on the unambiguous moral responsibilities he believes the United States faces, notably the rescue of the Iraqi refugees now fleeing their homes.

This proved to be one area of agreement for the four panelists. Walzer also urged that the United States pay reparations. “All of us are collectively responsible for that, [even]those of us who opposed the war,” Walzer said.

Hashmi said that leaders in the Arab world also had “penance to do.”

“Saddam Hussein had disturbed the peace of the whole world and one can point to no concerted action [by Arabs]to isolate his regime,” he said.