skip to main content
Return to Fordham University
You are at:Home»Inside Fordham»Scholar Urges Asian-American Studies to Move Beyond Categories 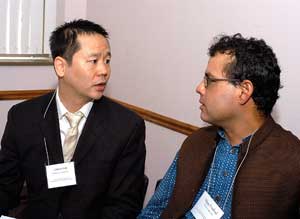 Asian-American studies programs should not be content to “carve out a place in society” for Asian Americans, but should seek to transform the whole of American society, a prominent South Asian theorist said on June 6.

Prashad, the George and Martha Kellner Chair in South Asian History and professor of international studies at Trinity College in Hartford, Conn., is a leading proponent of “polyculturalism,” the idea that all cultures are interrelated.

“[Having one’s own] space in society is an illusion,” he told an audience at the Lincoln Center campus. “We can talk about ‘having our place’ in society, but is it enough? Do we want a pluralist model in society, or a pleura-national model?”
P
ost-1960s racism, Prashad said, has a “supple dynamic” that works through the concepts of “colorblindness,” “multiculturalism” and the “model minority” to keep minorities categorized. He cited the idea of racial allegiance as one that does not fundamentally help minorities, and used Republican conservative Bobby Jindal, the nation’s first Indian-American governor, as a prime example.

Jindal was elected governor of Louisiana in 2007 and has been mentioned as a possible vice-presidential candidate for Republican nominee John McCain. Many South Asians are proud of Jindal simply because he is “one of them,” Prashad said, even though Jindal’s conservative values are opposite from their own.

“Among Indian communities, there is this feeling that when we arrive we are so distant from power that proximity to power is as important as power itself—regardless of affiliation,” said Prashad, who noted that the Indian-American community is the second-most devout Democratic voting base in the nation. “Allegiance is a very shallow and dangerous argument.

“[Jindal’s] family comes from Punjab. So what?” he continued. “He’s not been part of any Asian-American struggle as we understand it in the political category. Is racial allegiance substantial enough; is it a robust enough political position to hold [him]accountable given the undertow of upward mobility and profit and greed? I don’t think it is sufficient at all.”

Prashad, whose lecture was sardonically titled “2012: President Bobby Jindal,” is the author of 11 books. His books Karma of Brown Folk (University of Minnesota Press, 2000) and Everybody Was Kung Fu Fighting: Afro-Asian Connections and the Myth of Cultural Purity (Beacon Press, 2001) were chosen by the Village Voice as books of the year.

The two-day symposium drew many scholars and was designed to examine the links between Asian-American studies and other ongoing fields such as transnationalism, gender and global studies. Sponsors included the Graduate School of Arts and Sciences, Fordham College at Lincoln Center, Fordham College at Rose Hill and a host of university departments and programs.