skip to main content
Return to Fordham University
You are at:Home»Inside Fordham»Scholar Studies the Roots of American Entrepreneurship 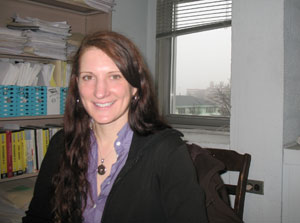 Some people catch a glimpse of the extreme inequality of wealth in the United States when Forbes magazine releases its annual list of the 400 wealthiest Americans. For Johanna Francis, Ph.D., the disparity is her life’s work.

For her dissertation at Johns Hopkins, Francis researched wealth and the capitalist spirit—the general idea that the unequal distribution of wealth is related to direct preferences for wealth, as well as to entrepreneurship. Now the assistant professor of economics at Fordham College at Rose Hill is investigating the tax treatment of owner-occupied housing as it relates to wealth inequality. In other words, does the public policy goal of increasing home ownership contribute to wealth inequality?

Francis and her co-researcher, Stanley Cho, Ph.D., of the University of New South Wales, suggest the answer is yes. Their study found that housing policy in the United States contributes to wealth inequality.

“We came up with this idea that if you look at the various plans in the U.S. to try to increase homeownership, you find that they disproportionately benefit the wealthy,” she said.

Housing policy in the United States is predominantly directed toward increasing homeownership through preferential tax treatment in a couple of ways: homeowners deduct mortgage interest from their taxes and those living in the homes they own don’t pay rental tax that the owner of a rental property is hit with. Yet if these policies were changed, general welfare would increase, Francis found in her study.

If mortgage interest were no longer tax deductible, the share of total wealth held by the bottom 50 percent of households would increase by 19 percent. In addition, imposing a 10 percent tax on owner-occupied homes, otherwise known as imputed rents, also resulted in a welfare gain of 0.7 to 3.8 percent.

“In general, the overall population would have higher welfare—higher happiness—under those scenarios,” Francis said.

To conduct the study, Francis and Cho used a baseline model of U.S. homeownership as it is today. They included mortgage interest deductibility and assumed that people derived more utility in owning than in renting. The model ignored housing price fluctuations, which has an impact on the size of debt leverage as well as the distribution of wealth.

“We did a couple of experiments where we removed mortgage interest deductibility and then assumed that the government would give individuals that money back, either in the form of lower income taxes or as a rebate, and what we found is that average effective income taxes could be lowered by almost 2 percent,” Francis said.

“We also looked at what would happen if the government then taxed imputed rent—when you own a house you live there and gain services from the house but you don’t pay any tax on those services. What if the government taxed your living in the house because you’re the owner and the renter, effectively. In that case, we also saw that there would be some increase in welfare, although it was small.”

Francis was recently awarded a faculty fellowship from the University. During that time, she plans to add entrepreneurship into her homeownership matrix.

“There is a whole literature on entrepreneurship that says if you have more wealth, you are more likely to become an entrepreneur, and increasing availability of funding for entrepreneurs has become a public policy priority. But in my dissertation work, I found that having more wealth actually had little impact on becoming an entrepreneur in general,” Francis said. “There were other things that were more important, such as entrepreneurial ability, risk-taking behavior and having a good idea. If you don’t have those things, how much wealth you have doesn’t make a difference.”

“Maybe if people are homeowners, it provides a sort of stability for them—if they don’t have to make rental payments and their mortgages are low, it provides security and also collateral for them to get loans,” she said. “We’re going to take the model that we used in the first paper and add choice between becoming an entrepreneur or a wage worker and then see what impact homeownership has on that decision.”