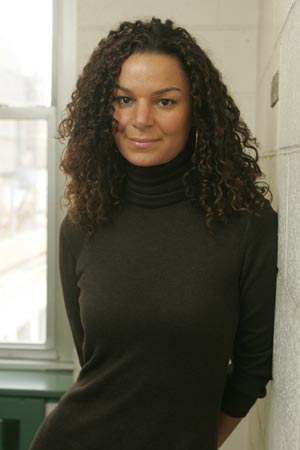 Carina Ray, Ph.D., is researching the sexual
politics of British colonialism in the Gold Coast.
Photo by Bruce Gilbert

In researching the changing nature of sexual relations between Africans and Europeans in colonial Ghana, Carina Ray, Ph.D., came across a telling historical snapshot.

In an 1845 account of his visit to the Gold Coast, as Ghana was then known, U.S. Navy officer Horatio Bridge noted that “all of the Europeans have native wives,” meaning that interracial marriages between European men and African women were common.

Over the following century, however, the frequency of these unions decreased significantly. Exactly one hundred years later, in 1945, Ray found that colonial authorities described the marriages of four British officers to Gold Coast women as an “epidemic” and further pathologized them as a “form of madness.”

“While these marriages were once very much accepted, a century later, they sent the colonial administration into a panic,” said Ray, an assistant professor of history.

A specialist in modern African history, Ray is presently writing a manuscript that interrogates the contested racial politics of colonial rule. She is documenting how colonial authorities and Gold Coasters changed their ideas about interracial sexual relationships during the colonial period. Those changes, she said, were markedly different from previous centuries.

From the late 1400s to the mid-1800s, it was very common for European men to marry African women on the Gold Coast. “These marriages produced prominent trading families who were important to the economic and political history of the coastal areas,” Ray said. “But as of the late 1800s, when Britain finally decided to formally colonize the Gold Coast, these relationships were increasingly frowned upon.”

While the shift was gradual, an official circular was issued in 1907 by John Rogers, the colony’s governor, which forbade European officers employed by the colonial administration from having relationships with African women. Two years later the Colonial Office in London issued a similar decree that reinforced Rogers’ local circular.

“These relationships were no longer accepted because they were viewed as posing a threat to administrative efficiency,” Ray said.

By breaching the divide between colonized and colonizer, which colonial rule was based upon, the administration feared that a European officer involved in a sexual relationship with a local woman risked, in the words of the Colonial Office, “lowering himself in the eyes of the natives, and diminishing his authority,” she said.

“Ensuring the respectability of its public officers meant that their private lives were increasingly policed,” Ray continued. In other words, although British colonialism projected itself as trying to “civilize” colonized populations, it ironically ended up having to “colonize” European male sexuality as well.

As a result, these relationships became more clandestine, and it was this shift that caused Gold Coasters to begin publicly voicing their concerns, Ray said.

“Because by the early 20th century these relationships rarely conferred respectability to the women who participated in them, Gold Coasters soon began to fear that illicit alliances between European men and local women were corrupting female virtue and, by extension, threatening the future of the nation,” Ray said.
By drawing attention to the increasingly unseemly nature of these relationships, Africans began chipping away at the veneer of alleged European moral superiority that underpinned the legitimacy of colonialism.

“Commentaries began appearing in Gold Coast newspapers warning of the ‘sad fate of the country’ should European men continue satiating their sexual appetites with the colony’s young women,” Ray said. “Gold Coasters inverted colonial rhetoric by casting Europeans not as bearers of civilization, but as obstacles in the way of it.”

Though there is much research on what these unions meant for Europeans and colonial governments, few have written about what interracial sexual relationships meant for colonized peoples, Ray said. In addressing this question for Gold Coasters, she hopes that her manuscript, Policing Sexual Boundaries: The Politics of Race in Colonial Ghana, will make an important contribution to the literature on colonialism, African history, sexuality and gender studies and the Black Atlantic world.

With the support of a Fordham Faculty Fellowship, this summer Ray will again travel to Ghana and Britain to do research for the final chapter of her manuscript. Titled “The Annans and Knights: Black Atlantic Family Histories at Empire’s End,” this chapter traces the lives of two interracial families who defied colonial era prescriptions by loving across the color line during a time of great upheaval in the British Empire.

Ray also tries to make Africa’s history more widely accessible in other ways. For the last several years she has been a monthly columnist for New African magazine, the oldest Pan-African monthly in print. Her column, “Lest We Forget,” reflects on Africa’s past in relation to its present and future and allows Ray to reach audiences in Africa, Europe and the United States.

Ray’s longstanding interest in contemporary African affairs and politics also can be seen in her forthcoming co-edited volume, Darfur and the Crisis of Governance in Sudan: A Critical Reader, which brings together many of the leading thinkers and activists involved in understanding and proactively addressing the situation in Darfur and Sudan more generally.