skip to main content
Return to Fordham University
You are at:Home»Inside Fordham»Scholar Sheds Light on Settlements and Trade in Medieval Greenland 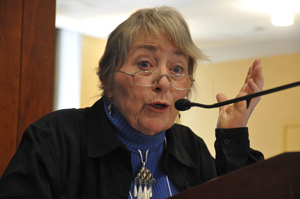 Kristen Seaver, Ph.D., says it was likely the fall of trade that led to the downfall of Greenland’s colonies.
Photo by Janet Sassi

According to medieval scholars, the last recorded event indicating the presence of Norse settlers in medieval Greenland was a 1408 wedding between ship captain Thorstein Olafsson and Icelander Sigrid Bjornsdaughter. By 1500, it is evidenced that all trading settlements on the environmentally inhospitable island had disappeared.

What, exactly, caused their demise?

That was the focus of a plenary lecture by independent researcher Kristen Seaver, Ph.D., who spoke on March 27 at Fordham’s 30th annual Conference of the Center for Medieval Studies. Seaver, author of The Frozen Echo (Stanford University Press, 2000) and Maps, Myths, and Men: The Story of the Vinland Map (Stanford University Press, 2004), said it was likely the rise and fall of trade that led to the expansion and eventual downfall of Greenland’s colonies.

The settlements were founded around 990 by Erik the Red, and became Norse colonies for trading furs, blubber, walrus ivory, falcons, eiderdown and other Arctic products. While laws prohibited foreigners from trading in the outlying Nordic colonies, it became common for trading vessels to report they had been “blown off course” to Greenland en route to Iceland because of the lucrative trading, Seaver said.

An expert in the area’s early cartography, Seaver displayed maps that incorrectly rendered the location and mass of Greenland in relation to Scandinavia and other lands. Such inaccurate renderings, she said, only made it easier for a few Icelandic vessels cited by the Norse tax authorities to falsely claim they “drifted off course” to the island.

“These Icelanders were clearly on to a good thing because there hadn’t been any danger that someone would pull out a map and say that the mariner’s stories were preposterous,” Seaver said.

As shipping improved and new trade routes opened, particularly those westward to Newfoundland, the settlements on Greenland dwindled and eventually disappeared, Seaver said. While some historians blame hostile natives or struggles with arctic elements for the disappearance, Seaver said there are several explanations for the colony’s demise.

“It had a horrible climate most of the time,” she said. “There was isolation because of diminished trade, and the fact that they let their agriculture go.

“At some point, you pick up and you move on,” she said.

Seaver noted that there are very few written records that historians can use to unravel the mystery of the Greenland settlements. Among those that exist, many are unreliable. Much of the period’s history must be deduced from archaeological and scientific information.

The conference, “New Directions in Medieval Scandinavian Studies,” drew some 140 international scholars—experts on Icelandic sagas, Viking identity and other topics within the subtext of medieval Scandinavian studies. Conference adviser Martin Chase, S.J., associate professor of English, said that Fordham had anticipated a much smaller conference and had to change a one-day schedule to two days.

“We received a huge response from people in Europe, which we normally don’t get,” Father Chase said. “Scandinavian medieval scholarship is not as small as one might think.”

The center’s 2011 annual conference will feature the metaphysics of Thomas Aquinas.