skip to main content
Return to Fordham University
You are at:Home»Inside Fordham»Scholar Sees Advantage in a “Crip” Vantage
The figures sculpted by artist-activist Liz Crow represent real people living on the “sharpened end of austerity.” (Image courtesy Liz Crow)
People can better understand global issues, such as neoliberalism and austerity, if they use the vantage of persons with disabilities, said the keynote speaker at the Inaugural Fordham Distinguished Lecture on Disability. The event was organized by the Faculty Working Group on Disability.

Robert McRuer, PhD, professor of English at George Washington University and author of Crip Theory, (NYU Press, 2006), said the term “crip” derives from the word cripple. Embracing the negative term allows those with disabilities to take ownership of a word that is used to disparage them, he said in an April 13 lecture. 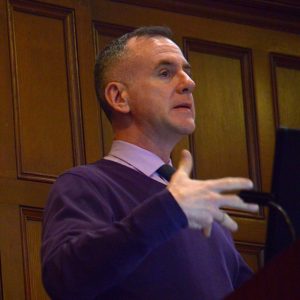 McRuer said he merged disability studies with queer theory in his book, using “crip” in the same manner that “queer” is used in queer theory.

“‘Crip’ has become a more radical term for artists and activists,” said McRuer. “It forges a coalition of ‘left-behinds’ who may or may not identify as disabled, but who can be … connected somehow through a crip analytic [that is]committed to theorizing vulnerability, precarity, and resistance expansively.”

Both crip theory and queer theory, he said, are concerned with how bodies, pleasures, and identities are represented as normal or as abject. Thus, the two fields can and do inform each other.

McRuer said his upcoming book, Crip Times: Disability, Globalization and Resistance, examines neoliberalist policies in the United Kingdom through a crip lens. He defined neoliberalism as being characterized through austerity measures that lower government expenditures, increase hours for workers, cut social services, and “impose a fetishistic view of capitalist growth.”

He said that he chose to focus on the United Kingdom because it’s “ground zero for austerity politics at the moment” in Europe, policies that have been in place since David Cameron became prime minister in 2010.

One way to access the vantage of persons with disabilities is through art, said McRuer. As the queer art scene has burgeoned, the crip art scene is also growing.

He focused on the work of artist-activist Liz Crow. Crow, who uses a wheelchair, began a performance piece last year titled “Figures” in which she created 650 sculptures out of mud from the River Avon. In order to work, she had to be lifted onto a site on the banks of a river because there was no ramp access.

The sculptures are expressionless, humanlike rounded forms, and “each figure represents a [real]person living on the sharpened end of austerity,” said McRuer. The 650 figures also coincide with the 650 constituencies in the House of Commons, which cut welfare benefits to these persons. 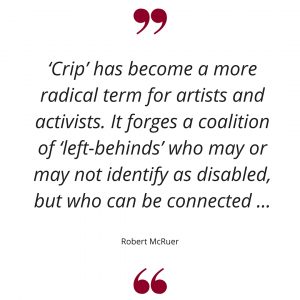 An online component of the piece shares their stories.

Many of the 650 represented by the figures had died appealing their claims for benefits that they lost, said McRuer. Some died due to addiction, some were terminally ill patients, and all fall within the scope of being someone whose life was harshly impacted by austerity.

McRuer said that while the issues were locally based, the artist Crow was trying to bring attention to what is now a global phenomenon. He said that tourists from Spain, a country also undergoing strict austerity measures, immediately related to the project.

“There are disabilities everywhere if you know where to look for them,” said McRuer. “And, in truth, everybody will be disabled if they live long enough.”

Once completed the sculptures were loaded into a truck that toured the country, including a pop-up exhibit at London’s Trafalgar Square. Eventually, the sculptures made their way across the country to the ocean, where they were burned as Crow read the stories of those affected by the austerity. The ashes were cast into the water.

The final act was designed to urge action against “now-global austerity politics,” he said.

“Basically these artists and activists are saying that the austerity measures are killing us,” said McRuer.