skip to main content
Return to Fordham University
You are at:Home»Inside Fordham»Faculty Reads»Scholar Reimagines Role of Ethics in Business 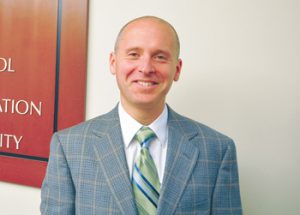 Miguel Alzola, Ph.D., says morality is not just about doing but primarily about being. The task of ethics is to discover and develop the character traits we need to live a worthwhile life.
Photo by Patrick Verel

What is the main task of business ethics? What is the ultimate purpose of businesses? Can an executive’s responsibility to his company’s shareholders be squared with the imperative to act morally and be a person of integrity?

These questions are being tackled by Miguel Alzola, Ph.D., assistant professor of legal and ethical studies in the Graduate School of Business Administration (GBA).

Alzola, a GBA faculty member since 2008, specializes in ethical theory and applied ethics. His research includes moral psychology and organizational behavior as well as topics on the moral responsibilities of businesses.

“I’m interested in the role of character in ethics; my research is concerned with the importance of the virtues in explanations of behavior and in the evaluations of persons,” he said.

“Some people believe that business ethics is just about decision-making and behavior. On the other hand, other scholars think that ethics is concerned only with questions of right and wrong. Well, I think there is something fundamentally problematic with reducing ethics to rights, wrongs and obligations. And ethical decision-making does not exhaust the domain of business ethics.

“Business ethics is, I submit, primarily about character development. It is not just about what we do but fundamentally about what we are: being rather than doing.”

“Someone may say bribery is morally wrong because it entails the violation of fiduciary duties, but sometimes bribes produce positive results to a point that such payments may be morally required. Think about Oskar Schindler’s bribes to Nazi officials to protect Jews,” he said.

“Furthermore, someone can make or refrain to make such payment out of a completely different set of motivations. Someone may refrain to pay a bribe out of fear of being caught and jailed. Someone may say no just because it is illegal. Or someone may not pay the bribe because he or she is not the kind of person who pays bribes. Those who understand ethics as a matter of actions and universal rules do not pay much attention to the distinction. But ethics is about the moral appraisal of the whole span of a human life rather than the evaluation of a single action.”

We still care about what people do and fail to do, though. Researchers are investigating the causes of behavior. Some have focused on factors that influence people’s actions. For example, obedience experiments conducted in 1961 by Yale University psychologist Stanley Milgram showed that participants could be manipulated into delivering what they thought were electric shocks to unseen victims in another room.

“The empirical evidence collected by social psychologists seems to indicate that behavior is more a function of the situation in which you are than of the character traits you possess. For example, if you are receiving instructions by phone, you are less likely to obey than if you are receiving instructions in person, no matter how compassionate you are,” Alzola said. “Likewise, if you are in a good mood, you are more likely to help somebody in need than if you are in a bad mood. If this is correct, it is bad news for my thesis.”

Alzola, however, has argued against these notions in papers such as “Character and Environment: The Status of Virtues in Organizations” (Journal of Business Ethics, 2008). He put forth that virtue is not just the behavior that someone performs but rather the motivations behind it. He noted that a dishonest person can occasionally perform an honest action, and a cowardly person can perform an act of bravery.

With that in mind, Alzola proposed that businesses are not just places to achieve financial goals, but also places that enable people to live valuable and happy lives, where they can pursue their projects and commitments. For businesses to play this role, employees must be put into situations that will make them better—or at least, not worse—than they are at home.

“Some economists say, ‘There is no ethics in business. Business ethics is an oxymoron. When you are conducting negotiations, you can’t afford to be ethical. You need to bluff. This is part of the game; it’s like a poker game,’” Alzola said.

“My claim is that when you habitually engage in that sort of behavior, your character is shaped in such a way that you become the person who bluffs. Again, it is a matter of character and habituation.”

He said he doesn’t mean that people can’t separate their professional lives from their personal lives. Hejust means that corporate policies should be designed to encourage good character traits. The corporate scandals that hit the United States in the early 2000s and the economic bust that occurred in 2008 have made ethics especially relevant since the perpetrators of these scandals were taught in American business schools.

This line of thinking is part of his work to formulate a full theory of virtue in organizations, which aims to answer three questions:

• What are the virtues that pertain to the context of business and bureaucratic organizations?

• What is the role of business corporations in the development of virtues?

Such a theory provides the general framework to think about the moral, social and political responsibilities of business firms.

Against the view that corporate money in politics will always harm democracy, he noted that the involvement of political speech by businesses has been beneficial at times. For example, the Sullivan Principles, which were developed by a board member at General Motors, helped put pressure on the South African government to end its policy of apartheid.

However, most of the time corporate electioneering impoverishes the political debate and, more importantly, exacerbate political inequality. Hence, he disagreed with the court’s ruling when it comes to the existence of a corporate right to free speech.

“The right of people to form corporations and to freely express their views are not undermined by setting limitations on how much these entities can be involved in politics,” he said. “Corporations have the right they have because the law says so. They are just artificial entities they do not have the dignity and rights that all humans have.”clesia, of the church, as it becomes truly universal.”