skip to main content
Return to Fordham University
You are at:Home»Colleges and Schools»Gabelli School of Business»Scholar Named Toppeta Chair in Global Financial Markets 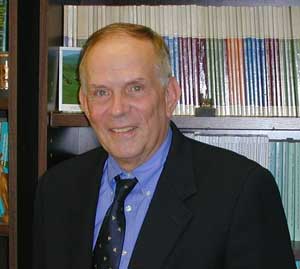 James R. Lothian, Ph.D., Distinguished Professor of Finance in the Fordham Schools of Business, has been named the inaugural holder of the Toppeta Family Chair in Global Financial Markets in the Gabelli School of Business.

In his new position, Lothian, who joined the Fordham faculty in 1990 and was named Distinguished Professor of Finance in 1997, will continue to devote time to researching international finance, monetary economics (including monetary policy), financial history– both U.S. and international—and the incidence and international transmission of economic disturbances.

His most recent investigations have focused on exchange-rate behavior and history, monetary policy and inflation, and financial globalization and the links between interest rates and exchange rates and economic policy during the recent financial crisis.

“We were very pleased to have Jim Lothian as the inaugural Toppeta chair,” said Stephen Freedman, Ph.D., provost of the University and professor of ecology and evolutionary biology. “As a distinguished researcher and gifted teacher, Dr. Lothian embodies the ideals Fordham seeks in its faculty. His appointment underscores the University’s commitment to innovative and rigorous business programs, both at the graduate and undergraduate levels.”

He is married to the former Judith McLaughlin, a professor of nursing at Seton Hall University, with whom he has five grown children and nine grandchildren.

He served as director of Fordham’s Frank J. Petrilli Center for Research in International Finance from 2002 until March of this year.

An award-winning educator, Lothian teaches courses on managerial economics, contemporary issues in global finance and macroeconomics as well as a seminar-type course for Gabelli honors students.

The chair was established with a $1 million gift from Bill Toppeta, FCRH ’70, and his wife Debra. The criteria for it included:

⋅ A demonstrated commitment to extending and transmitting knowledge in global trade and financial markets to students, the academic community and the profession.
⋅ A research record focused on such areas as global financial markets and global trade, including regulatory, technological and policy issues.
⋅ A demonstrated ability to work well with market practitioners, to lead practitioner-orientated seminars and to organize scholarly conferences.

“Fordham has the advantage of being in the commercial center of the world,” Toppeta said. “I think it’s important to have a business school that has a strong international component to it.”

To create the endowed chair, the Toppetas leveraged the generosity of Mario J. Gabelli, GSB ’65. As part of his record-breaking $25 million gift to Fordham in 2010, Gabelli designated $5 million to be used to match other donors’ gifts toward endowed chairs.

Lothian has served as the editor of the Journal of International Money and Finance since 1986. He has been a research associate of the National Bureau of Economic Research, and a visiting scholar at the International Monetary Fund, the Federal Reserve Bank of Atlanta, and Maastricht University in the Netherlands.

Prior to becoming a full-time academic, he was vice president in charge of financial research at Citibank/Citicorp.

“The Toppeta family chair is truly a fine thing for Fordham,” Lothian said.

“Endowed chairs enable universities to attract and keep good scholars.  I feel very honored to be chosen as the first chair holder.”