skip to main content
Return to Fordham University
You are at:Home»Inside Fordham»Scholar Explores the Irish Influence on New York Catholicism 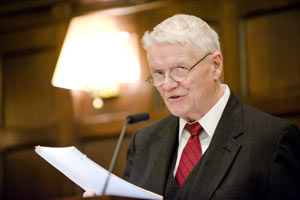 John McCarthy, Ph.D., answers a question from the crowd at Duane Library.
Photo by Ryan Brenizer

To get a sense of how Irish immigrants shaped the Catholic Church in New York City, one need only gaze at the majestic twin spires of St. Patrick’s Cathedral.

“The dominant Irish presence in the history of the New York Archdiocese is an unassailable fact,” said John McCarthy, Ph.D., professor emeritus of history at Fordham. “Just consider that 11 of the 12 bishops of New York were Irish or of Irish extraction.”

Speaking on March 6 at Duane Library, McCarthy examined the impact of the Irish on Catholicism in New York. He charted the group’s influence and addressed two questions: “Was the church in New York too Irish?” and “Were the Irish in New York too Catholic?” before taking questions from the crowd of more than 100 attendees.

To the first question, McCarthy explained that the authoritarian, dogmatic and puritanical overtones of the church in the 19th and 20th centuries were particularly Irish traits. “These characteristics are assumed to have an Irish flavor,” he said, “since the church in Ireland was similarly characterized in the same era.”

These Irish attributes of the New York Archdiocese were seen as inhibiting the Americanization of the church. Americanization meant more openness to lay influence and ecumenical involvement—distinct from the clerical and centralized European church.

McCarthy pointed out that a vast majority of Famine immigrants were unskilled and uneducated, which led to increased crime among the Irish. Priests threw themselves into acclimating the immigrants to their new country through the power of the pulpit and the creation of social support networks. The priests’ efforts proved wildly successful, mostly due to the authoritarian and puritanical approach that some had criticized.

“Within 40 years the Irish proportion of arrests for violent crime had dropped from 60 percent to less than 10 percent,” said McCarthy, who founded the Institute for Irish Studies at Fordham in 1997.

To the second question, “Were the Irish in New York too Catholic?” McCarthy explored the notion that the church teachings prevented many Irish Americans from supporting radical nationalist movements working for Irish independence. While 19th-century Irish revolutionaries purposely distanced themselves from the church, they nevertheless expected the Catholic hierarchy in New York to turn a blind eye toward their activities, which church leaders often opposed outright.

In the 20th century, however, declining numbers of Irish immigrants coupled with an increased interest in Irish nationalist issues opened the door for church leaders to become involved in the Northern Irish conflict.

“John Cardinal O’Connor involved himself very much in Irish issues,” McCarthy said. “He went on a fact-finding tour of Northern Ireland in 1984 and remained outspoken on Catholic and nationalist grievances in Northern Ireland—especially in his homilies at St. Patrick’s Day mass.”

The lecture, “The Irish in New York: What about the Saints?” was sponsored by the Archdiocese of New York and the Francis and Ann Curran Center for American Catholic Studies at Fordham. It was the first event in the Bicentennial Lecture Series to commemorate the 200th Anniversary of the Archdiocese.