skip to main content
Return to Fordham University
You are at:Home»Inside Fordham»Scholar Examines the Link between the Media and Presidential Leadership 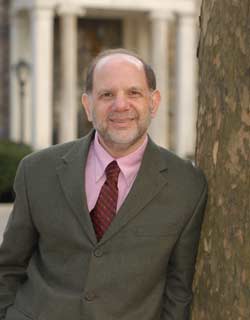 Jeffrey E. Cohen, Ph.D., studies how the leadership styles of American presidents are linked to changes in the news media.
Photo by Chris Taggart

There was a time when the actions of the American president commanded nearly undivided national attention. When he gave a speech from the Oval Office or walked his dog on the White House lawn, news editors took notice, classrooms paid attention and dinner tables fell silent.

That’s simply not the case anymore. Gone are the days when the president could influence a majority of the public through the mainstream media, said Jeffery E. Cohen, Ph.D., professor of political science and author of The Presidency in the Era of the 24-Hour News (Princeton University Press, 2008).

Today, the media landscape has been transformed by increased competition, a greater emphasis on profits and the rise of partisan broadcasters. As a result, public mistrust of these once-revered institutions has grown.

“The press used to be one of the highest-regarded institutions in American society,” Cohen said. “Now it’s one of the least.”

These changes have caused a shift in the leadership style of modern presidents, he explained. The fractured media environment has caused presidents to play to their hard-core supporters—and the niche networks where they get their news—instead of using mainstream media outlets that have grown less popular and no longer give them the attention they once did.

“Presidents have become leaders of only part of the nation—not the entire nation,” said Cohen, who recently received a fellowship to further his research at Princeton’s Center for the Study of Democratic Politics.

Perhaps no president best exemplifies this idea better than George W. Bush. In 2000, after Bush beat then-vice president Al Gore despite losing the popular vote, pundits told Bush he should become a “unity president,” one who would cooperate with the Democrats.

“Instead, what does Bush do? He builds a Republican cabinet and says, ‘To heck with the Democrats,’ and I think he got it right,” Cohen said. “In this political context, he may not have had a choice.”

Cohen explains that from the early 1950s to the late 1970s, negative news about the nation in general went hand-in-hand with low public opinion of the president.

“But since then, there’s been no correlation; none whatsoever,” he said. “It got me to ask what in the world is happening that would take this normal relationship and throw it topsy-turvy? It’s a nice puzzle—the kind political scientists love to figure out.”

He discovered that the emergence of cable news channels, new media such as the Internet and new technology that allows people to record television programs have given people more choices about where and how to get their news.

As a result, newspaper and television news audiences have shrunk. Smaller audiences for mainstream media mean less revenue from advertising, which has led to increasingly bold attempts to lure viewers in this hyper-competitive environment.

There’s been a replacement of hard news with softer news. Decades ago, entertainment programming subsidized the cost of news production at the major networks, Cohen explained. Today, those news shows have to pay for themselves.

“And news doesn’t pay,” he continued. “Because of that, news broadcasts have to cater to public taste. Journalists have to worry about who is going to watch this stuff.”

Less hard news means less coverage of the president, and news in general is delivered in a more negative tone to attract ratings. Meanwhile, niche news stations that have eaten away at mainstream media audiences cater to the political notions people already possess.

“Whether they accommodate a left-leaning audience or one that falls far to the right, they satisfy people who are just seeking a reinforcement of their predispositions,” Cohen explained. “The only people who truly follow politics are the arch Democrats and arch Republicans. The middle is just pretty much out of the game.”

People generally rely on their political predispositions to form opinions of the president, Cohen said. So with mainstream media giving less coverage to the president and left-leaning networks airing de facto negative reports on any Republican leader, Bush had nothing to lose by snubbing the Democrats.

But what explains why President Bill Clinton enjoyed approval ratings that were steady—if not slightly higher—when the Monica Lewinsky scandal broke? And why has Bush remained mired in poor approval ratings as long as the Iraq war continues?

“Part of what happens with smaller news audiences—audiences that are cynical and unaccustomed to news about politicians—is they don’t believe the bad news,” Cohen said. “The public just pooh-poohed the Lewinsky story because they thought the media were out to get Clinton.”

Yet real-world events, like a neighbor’s house going into foreclosure or a friend’s son dying in a war, still affects the public’s perception of politicians, Cohen said.

“You don’t need news for that,” Cohen said. “No matter how the news reports it, it’s going to sink in because people see it for themselves. Yet something like the Lewinsky scandal is not going to be found out any other way, and it’s a way the public tends to mistrust.”