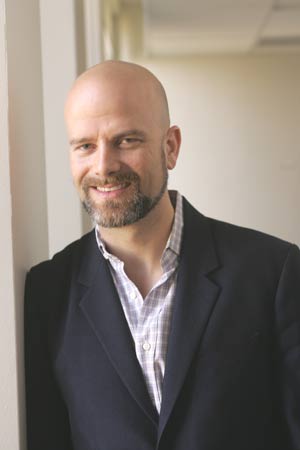 Denis Diderot, one of the most prominent writers and philosophers of the French Enlightenment, dabbled in many subjects, including literature and physiology. He invented the modern form of art criticism, and though many revere Diderot, some have dismissed his work as too filled with contradictions and paradoxes.

Andrew H. Clark, Ph.D., assistant professor of French and co-director of literary studies, takes issue with the negative connotation that comes with the “contradictory” tag. In fact, Clark’s recent book, Diderot’s Part(2008, Ashgate), examines the complexity of the French writer’s thoughts and the issue of contradiction in his works by examining the unstable relationship of part and whole.

“Yes, he’s constantly bringing ideas that are contradictory. But I argue that by developing their relation to the whole, you can give unity to his thought without undermining its dynamic quality,” Clark said. Diderot’s works include several hundred articles, famous translations—such as the monumentalEncyclopédie, which began as a translation of Chambers’ Cyclopedia—plays, scientific texts, political tracts and novels.

Diderot lived during the 18th century, which saw the rise of modernity, contemporary academic disciplines, as well as the ideas of rational thought and enlightenment. Clark argues that Diderot attempted to think of enlightenment as dynamic thought that preserved the autonomy of the part, rather than as abstract reason that subsumed all differences, as others have claimed.

“In the 20th century, some argued that the [Enlightenment] saw the birth of a totalitarian rationalism, which led to fascist states, and even to the atrocities of the Holocaust,” Clark said. “But over the last 15 years or so, as scholars have rethought the homogeneous and hegemonic readings of enlightenment, Diderot has become an interesting player. He forces us to re-examine the Enlightenment and its rational categories by his manipulation and dispersion of various systems, taxonomies, and his self-conscious engagement in enlightenment critique. He lets anecdote and scientific experiment sit side by side, on equal footing.”

Diderot’s dynamism is why he wasn’t afraid to use literature and music in the same texts, Clark said, or fuse the works of two intellectual archenemies to develop a new way of thinking.

“He took the work of two enemies—Swiss physiologist Albrecht Von Holler and vitalist Robert Whytt—who have different physiological systems, and used both of their theories in one paragraph,” Clark said. “This way he was able to create a dialogue between disparate parts to create a more animated and complicated understanding of the whole.”

Clark’s interest in Denis Diderot began during his undergraduate years at Amherst College in Massachusetts, where he studied with three professors in the French department who were experts on Diderot.

“I’m interested in the somewhat unstable relationship between the part and whole in Diderot’s texts, particularly in the 18th century,” Clark said. “I try to locate the epistemological change that comes about in the 1750s with respect to part and whole.”

Clark examined Diderot’s writings on physiology, music, art and literature. Because his writing is what Clark finds most fascinating, he examined how Diderot’s thoughts present themselves in the text.

“In a single phrase, for instance, you’ll see the frequent and almost overabundant use of parataxis,” Clark said. “All of a sudden, a phrase will lose the typical sequence that leads to a hierarchy of meaning. We have these added elements that begin to destabilize some of the ideas that are precisely in that sentence, and that forces us to rethink the ideas being expressed.”

For example, in an analysis that Diderot penned in his Salon of 1767 on Clair de Lune, a paining by Claude-Joseph Vernet, he takes the readers on a mystical ride.

“Diderot frequently gives his readers the impression that what they are seeing is not an illusion, but the thing itself,” Clark said.

“[In his analysis of Vernet’s painting,] Diderot tells his reader that he is leaving the decadent company and philosophical conversations at the château at which he was staying to go on a walk with a friend and some students in the countryside. They walk through seven different sites. He describes what he’s seeing—the landscape, the sea, the peasants—and describes it from different positions. Finally, when we get to the sixth site, we basically learn that he hasn’t been walking around nature at all. He’s been looking at paintings in the salons the whole time. These are Vernet’s landscape paintings, and now he’s going to look at Clair de Lune for what it is—a painting.”

“He lists all the types of thing you see in the painting—boats, water, the rocks on land, etc.,” Clark said. “It’s a verbal cascade. They aren’t even sentences anymore. It’s encyclopedic, but completely devoid of the rich poetic narrative that hadilluminated earlier descriptions of Vernet’s paintings. Rather than give in to triumph of scientific language, Diderot’s lists perform something else.”

Of the painting, Diderot said each part has autonomy, and that the assemblage could be reconfigured by a single movement to produce an infinite number of paintings.

“Isolate the portion of the sea and the sky, with the lunar light falling on the water, and you have a new painting,” Clark said, citing Diderot. “It’s as if Diderot is taking cold scientific language and turning it into something playful, a kind of epistemological counter poetics that rethinks the very abstract categories of Enlightenment reason that allegedly had triumphed.”

Diderot was many things, but his philosophy was never dogmatic, Clark said. “His philosophy was always unfolding in a space in which the reader became an active party, fully engaged in using his or her mind and imagination.”