skip to main content
Return to Fordham University
You are at:Home»Inside Fordham»Scholar Examines American Democracy Through the Prism of Modern-Day Slavery 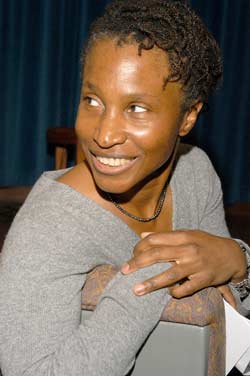 Joy James, Ph.D., said that the United States still faces a great racial divide, and focuses her work on race and incarceration in this country.
Photo by Ken Levinson

Political theorist Joy A. James views American democracy as a system riven along racial and ethnic lines, with modern-day slaves, abolitionists and a prison industrial complex. The harsh realities of this vast complex (there are more than 2 million people behind bars in the United States) and its implications for a democratic society lie at the heart of her wide-ranging social critique, delivered as this year’s Gannon Lecture at Fordham on Nov. 6.

“Those of us who engage in this type of work…are accused of romanticizing prisoners,” said James, who received her Ph.D. in political science from Fordham in 1987, and is the John B. and John T. McCoy Presidential Professor of Africana Studies at Williams College. “Actually, it is an attempt to engage in dialogic warfare [and]define the role and function of the captive, and how that role and function can be used to further a democratic project,” she said. “What we are [really]attempting to do is to argue that prisoners seek redress from the worst forms of human rights abuses, just like we seek full employment and comfortable lives.”

A self-described radical intellectual, James has in the past seven years edited three collections on politics and incarceration, the latest of which is The New Abolitionists: (Neo)Slave Narratives and Contemporary Prison Writings (State University of New York Press, 2005). The fourth and final of what she calls her “prison anthologies” will be published next year.

In James’ worldview, the American “penal landscape” brooks no freedom; it is all encompassing and spring-loaded to ensnare blacks, Hispanics and other minorities. Her usage of terms, such as “neo-slave,” has been challenged by fellow scholars, but she is unapologetic. The language, she said, serves to convey both a sense of urgency and a “degree of clarity.”

To James, America was born as a slave state and has developed into what she calls a “penal democracy.” In this milieu, power and control is maintained by the “master” state and opposition comes from abolitionists, which include advocates, activists and scholars like herself. At the bottom of the hierarchy is the “prisoner slave.”

The penal system, she said, is structured in such a way as to render substantial economic and political benefits to white Americans. She points to New York state as an example. The majority of incarcerated people are from urban areas, particularly New York City. They are sent to correctional facilities in upstate New York, areas that are mostly rural and white, which gain politically and economically from their presence.

Those gains involve everything from jobs created by the panoply of services that maintain the penal complex to the added resources because of the increased population.

“Your hometown may be the Bronx, but your prison town may be [a town in]upstate New York, where you are not allowed to vote… but it is the prison town that accrues your civic value, to the extent that you have any [as a prisoner],” she said. “You are stripped of the vote but your body is counted, and with the counting, an industry evolves… . As Republican, largely rural and largely white areas accrue more political clout, urban, largely black and largely brown areas have their political clout diminished.”

“As we struggle around democracy and captivity, it is not just about what language we use, [or]the visuals we put up for our consideration or we reproduce in academic texts,” James said. “It’s also going to be a struggle about political gains.”

The Gannon Lecture Series, which began in the fall of 1980, brings distinguished individuals to Fordham to deliver public lectures on topics of their expertise. It is named in honor of Robert I. Gannon, S.J., president of Fordham from 1936 to 1949. Over the years, the Gannon Lecture has hosted such luminaries as Toni Morrison, Joseph Papp and Albert Bandura.