skip to main content
Return to Fordham University
You are at:Home»Inside Fordham»Scholar Discusses the ‘Bride of Christ’ in the Early Church 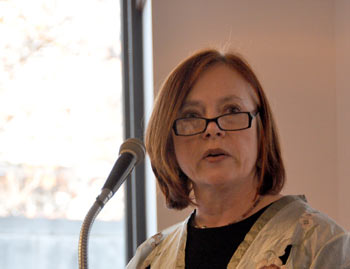 In the early Christian church, the image of the “Bride of Christ,” was first used to describe the soul’s connection to Jesus Christ. But eventually, the symbolic marriage of women to Christ became a way enforce submission to patriarchal authority, said Dyan Elliott, Ph.D., in a lecture on Nov. 17 at Fordham.

Elliott, the Peter B. Ritzma Professor of Humanities at Northwestern University, delivered “Mystical Marriage in the Middle Ages: Divine or Diabolical?” at the William D. Walsh Family Library on the Rose Hill campus.

“The traditional understanding of the consecrated virgin as Bride of Christ is a concept so intrinsic to female spirituality and so familiar to medievalists, that it’s difficult to imagine a time when it was otherwise,” she said.

“But there was a time when the bride was just a metaphor unattached to any human body—before it tumbled from the symbolic order … and finally came to rest upon the female body of the consecrated virgin.”

The story of its descent, she said, is a striking example of a religion whose central mystery is “the word made flesh.” Although the history of the “Bride of Christ” stretches from late antiquity to the 15th century, it has several notable highlights.

The relationship between God and Israel, she noted, was compared to a marriage.

“The apostle Paul talked about it, too. In comparing the marriage of the soul to God, he appropriated the role of a nervous father of the bride, saying, ‘I am jealous over you with Godly jealousy, for I have espoused you to one husband, that I may present you as a chaste virgin to Christ,’” Elliott said.

“In this example, the marriage between God and the soul is gender-blind,” she explained. “But then Paul aligned Christ’s rule with a husband’s rule of his wife—extorting husbands to love their wives as Christ does the church—thereby strengthening normative gender roles.”

In the late second century, the Christian writer Tertullian described intermarriage between angels and human women to support the notion of virgins becoming “Brides of Christ.”

Tertullian held a radically different vision of the cosmos, one in which heaven and earth intersected at many points, and where sexual relations with supernatural beings was a possibility, she noted.

“He was obsessed with the history of the watcher angels in Genesis 6, whose intermarriage with the daughters of men precipitated God’s decision to flood the Earth,” said Elliott, author of Proving Woman: Female Spirituality and Inquisitional Culture in the Latter Middle Ages (Princeton University Press, 2004).

“Tertullian contended that virgins were the special object of angelic lust and ultimately responsible for the fall of humans. This assignation of blame is one of the odder manifestations of a pro-virginal prejudice,” she said. “He just couldn’t conceive of angels hankering after matrons, which he described as bodies already defiled and relics of human lust. So virgins had to cover up.”

St. Cyprian, bishop of Carthage in 249 A.D., carried the “Bride of Christ” tradition even further, decreeing that even ascetics of the opposite sex should not share living quarters, a practice that was known at the time as “syneisaktism.”

“A deacon and several consecrated virgins kept house and even slept together, attempting to reap the androgynous benefits of chastity,” she said. “But to Cyprian, it was adultery.

Quoting Cyprian, she said, “If a husband should come and see his wife lying with another man, is he not indignant and maddened, even seizing a sword? How indignant and angered then, must Christ our Lord and judge be?”