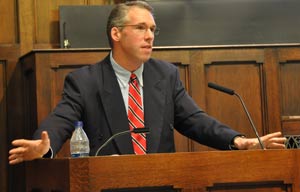 “Winning isn’t everything, it’s the only thing,” said legendary NFL coach Vince Lombardi (FCRH ’37), encapsulating the hard-charging pursuit of victory that he would come to personify.

That iconic statement—actually a paraphrase of an earlier coach’s words—helped fuel the American passion for “winning, first and foremost,” according to a scholar who delivered a wide-ranging lecture that illuminated Lombardi’s life, career and staunch Catholic faith.

The lecture, “Vince Lombardi and the Catholic Contribution to America’s ‘Must-Win’ Obsession,” was sponsored by the Francis and Ann Curran Center for American Catholic Studies on Oct. 5 at Fordham College at Rose Hill.

Jeffrey Marlett, Ph.D., professor of religious studies at the College of St. Rose in Albany, N.Y., described the impact of statements by Lombardi and another prominent Catholic, Major League Baseball manager Leo Durocher, who was famously quoted as saying “nice guys finish last.”

The quote wasn’t quite accurate, but it had power, as did Lombardi’s statement, Marlett said. It was culturally significant—and unsettling to the Protestant establishment—in the 1940s and 1950s to hear such statements from famous Catholics such as Lombardi, who exemplified Catholic devotion by going to Mass every day at the same time, Marlett said.

“Part of their cultural power was a certain way of being Catholic—going to Mass every day at the same time—which for Catholics in the system, so to speak, was very spiritual. ‘This is just what we do. We have devotions and we go to Mass, and when the priest raises the host, we kneel,’” Marlett said.

“Some of that cultural power, it seems to me, was this kind of religiosity that Lombardi didn’t just embody, he practiced,” Marlett said. “He was no different in that sense. A lot of people look at Lombardi like, well, he’s this different figure; he’s this iconic figure. He was just as much a normal Catholic as the parents and grandparents of all the folks in this room.”

Marlett added complexity to Lombardi’s image as a rigid, demanding coach. During practice, Lombardi made the Green Bay Packers practice the end-around sweep “until basically they could run it with their eyes closed, until it was committed to muscle memory.” During practice, he quoted a passage from Corinthians that ended with the command, “run to win,” Marlett said.

But he gave his players latitude during games, telling his running backs to “run to daylight”—that is, wherever their blocking opened up a hole in the defensive line—rather than telling them where to go.

“Just run it,” was Lombardi’s response when asked where to run the ball at a crucial moment during the so-called “Ice Bowl” in 1967, Marlett said. The improvised play that followed led to a 21-17 victory over Dallas.

That win, under enormous pressure and miserable conditions, was “the perfect expression of Vince Lombardi,” said Marlett, quoting author David Maraniss. “‘In his speeches, Lombardi had talked about character in action, and here it was in real life.’”

Marlett addressed other areas in which Lombardi was seen as rigid. While he was socially conservative, he looked out for men in the NFL who were gay, and was the first coach to give African-Americans the chance to play for the Green Bay Packers, based in an area that was overwhelmingly white.

“When you study Catholics in the United States, one of the things that it always helps to remember is that Catholic figures don’t plot out regularly on the spectrum between conservative and liberal,” Marlett said.

Lombardi’s intense commitment to winning had its adverse impacts, Marlett said—on his family life, and on his body. When he received communion during Mass, altar boys noticed that his tongue was jagged from chewing on it over the years.

“He was very well-liked, and on the inside, he was chewing himself up,” Marlett said.