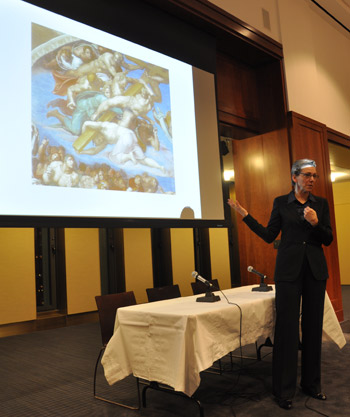 Lee Palmer Wandel, Ph.D., professor of history and religious studies at the University of Wisconsin-Madison, with a detail from Michelangelo’s ‘Last Judgment.’
Photo by Patrick Verel

The Sistine Chapel’s best-known work of art is arguably its ceiling, which was painted by Michelangelo between 1508 and 1512.

But the Renaissance master’s “Last Judgment,” which was unveiled in 1541 on a wall directly behind the altar, is not to be dismissed. In fact, the painting is so richly detailed that it is open to endless interpretation, said Lee Palmer Wandel, Ph.D.

“Perhaps no other single image has provoked as much criticism over as long a time as this one. In one of the most sacred locations—the chapel in which the Pope celebrated some of the most important Masses, before both ecclesiastical and secular dignitaries—Michelangelo chose to paint dozens upon dozens of nudes,” Wandel said on Oct. 22 at the Lincoln Center campus.

“As the papal master of ceremonies, Biagio da Cesena, said, ‘It was a very disgraceful thing to have been made in so honorable a place—all those nude figures showing their nakedness so shamelessly … a work not for the chapel of a Pope, but for a bagnia or a tavern,’” Wandel recalled. “In response, Michelangelo painted Cesena’s face on one of the damned.”

Wandel, a professor of history and religious studies, University of Wisconsin-Madison, delivered her lecture, “A Liturgical Reading of Michelangelo’s Last Judgment,” as part of the St. Robert Southwell, S.J., Lecture Series.

The painting, she noted, has many elements that set it apart from its contemporaries. Aside from its depiction of nudity—Christ is wearing nothing but a loincloth—it also contains no blood. Even St. Sebastian, who is normally pictured with arrows piercing his torso, is holding the arrows in his hand. Also, she noted that up until then, the final judgment was rendered as an orderly sorting out of souls.

“Here is no image of stasis, of a stable ordering of the world. No one is seated. No one is static. The bodies of the saved as well as the damned are rendered in movement,” she said. “Michelangelo’s Christ is not bearded, but a young man, without any beard, originally without clothing of any kind—and not seated, not in stasis, but in motion, ‘rising’ as many of his interpreters see the figure.”

Examination of the painting’s placement above the altar also shows, she said, that if a celebrant is raising a host and chalice above his head, a clear line can be seen leading up through the painting directly to Christ. Michelangelo would have known the Mass primarily not as a text, she said, but as a visual, aural, haptic, olfactory, somatic experience, and would have witnessed the complex relationship between the priest and the person of Christ.

Ultimately, the painter’s faith, which Wandel said has been described as “Sphinx-like,” can be seen in high relief on the wall of the chapel.

“The nudes of the ‘Last Judgment,’ I think, were not simply studies in classical form, but a breathtaking engagement with incarnation and its implications for humankind in Michelangelo’s time—hence painting Cesena into the image,” she said. “Christ’s perfect form serves as a visual, material link to all the saved who surround him, as well as to the damned, whose contorted figures convey the pain of which the human body is the means as well as the site.”