skip to main content
Return to Fordham University
You are at:Home»Inside Fordham»Scholar Delves Into History to Learn Lessons From Outsiders 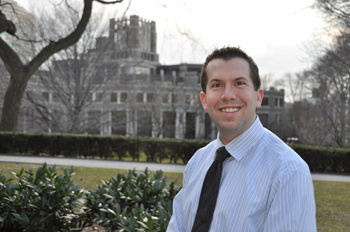 History is written by the winners. That axiom describes how conflicting groups define each other, and how the group that outlasts its adversary gets to have the final say.

The same can be said about differing religious traditions, according to J. Patrick Hornbeck II, D.Phil., assistant professor of theology and medieval studies.

Still, Hornbeck has found that traditions on the margins can teach a great deal about faith and religion, both in how they were forced to the margins and how they put themselves there.

“Let’s say that you and I are Catholic, and we disagree about whether a particular song should be played,” he said. “You decide that my not liking your song bespeaks a lack of loyalty to the faith. So you construct the idea that I’m outside your tradition.

“I’m not perceiving it that way; I’m just trying to get on with my life, and you’re making a big deal out of a song that I don’t particularly care for,” Hornbeck continued. “What begins to happen—and this is a contemporary phenomenon as well as a historical one—is that these differences evolve into really big categories, like heresy.”

Hornbeck has explored this idea extensively in What is a Lollard? Dissent and Belief in Late Medieval England (Oxford University Press, 2010) and Wycliffite Controversies (Brepols Publishers, 2011), which he co-edited.

John Wyclif, a 14th-century English theologian and professor, was a major inspiration for Christians who, in the years leading up to the Protestant Reformation, began to question the need for a Pope and the doctrine of transubstantiation. Hornbeck said that although Wyclif was not alone in questioning these ideas, his prominence made him a target. He became a hero to Christians who embraced what they regarded as a simpler religion, but who were branded by authorities as Lollards, which became a catchphrase for all heretics.

“The evolution of Lollardy is part of a much broader process about how societies marginalize people they don’t like. In the Middle Ages, it was heresy; today, it’s something else. A lot of What is a Lollard? is informed by philosophical and sociological analysis of how people are categorized,” Hornbeck said.

“For a long time, scholars assumed that someone who was branded a Lollard held a very specific set of beliefs,” he said. “But the more I looked at it and other people in the field talked about it with me, I began to realize that the term Lollard isn’t all that meaningful. It’s just a dirty word.”

Hornbeck is also working with two other scholars on Wycliffite Spirituality, a collection of modern translations of Wycliffite writings that will be published by Paulist Press. He is hoping the book will showcase the positive contributions of Wycliffism. “It gives people a different lens to look at something they think that they know,” he said.

Hornbeck expects that another of his projects will help to shed light on the formation of the Society of Jesus.

While researching the connection between Christian mysticism and heresy, Hornbeck learned about the Brotherhood of the Common Life, also called the “Modern-Day Devout.” Founded by Gerard Groote in the late-14th century in the Netherlands, Hornbeck described the members as half working in the world of people and half outside of it. In line with his interpretation of the Bible, Groote established a commune that eventually grew to become a monastery.

But Groote never wanted his followers to become monks.

“He wanted them to live in a city and be available for spiritual counsel with people. He wanted them to be a model of what a simple Christian community could be like in the middle of an urban center,” Hornbeck said.

“So they began to develop spiritual practices by which they spent time examining their consciences. A couple times a day, they went off for 10 minutes and thought about what had happened to them during the day, and asked, ‘Where is my conscience? Are there sins of which I need to be conscious?’”

One member of the brotherhood went on to lead the Collège de Montaigu at the University of Paris, where, Hornbeck noted, both John Calvin and St. Ignatius Loyola attended classes. In addition, a copy of the Brotherhood’s spiritual exercises was printed at the same monastery that St. Ignatius later visited.

“It’s interesting that the spirituality of St. Ignatius includes regular opportunities to examine your conscience, as well as focuses on being part of the world,” Hornbeck said. “There are similarities between the Brotherhood of the Common Life and the Society of Jesus.”

Although it’s unclear whether Calvin, who embraced Protestantism, and Loyola, who founded the Society of Jesus, were classmates, Hornbeck said it is significant that they both attended a college marked by a self-examining, self-criticizing spirituality, even though they took it in vastly different directions.

“Ignatius said, ‘If you go through these spiritual exercises, you’ll be closer to God, and you can cooperate with God to achieve salvation.’ But Calvin thought, ‘The more you go through these spiritual exercises, the more you realize you’re sinful and can’t save yourself. Only God can do that,’” he said. “The method is the same, so I’m interested in looking into the connections between the Brotherhood of the Common Life, Ignatius, and Calvin, and how they all relate.”