skip to main content
Return to Fordham University
You are at:Home»Inside Fordham»Scholar Delves Deep into Human Experience and Description 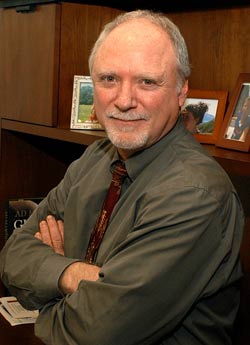 Frederick J. Wertz, Ph.D., is an expert in the existential-phenomenological approach to psychology.
Photo by Ken Levinson

Sigmund Freud used qualitative analysis when listening to his patients free associate. So did William James, who analyzed religious experiences from the diaries of saints and mystics.

Yet in psychological circles, this research technique hasn’t always gotten the attention—or respect—it deserves, according to Frederick J. Wertz, Ph.D., professor and chair of the Department of Psychology.

Qualitative research is a method of gathering and analyzing information by which the findings are not arrived at through statistical or other numerical procedures. It is a practice that contrasts sharply with mainstream psychology, and Wertz is trying to change that.

Wertz is an expert in the existential-phenomenological approach, a type of psychology that takes a subject’s descriptions of his or her experiences and then qualitatively analyzes those descriptions to understand what they are really living through.

“Even as an undergraduate,” Wertz said, “I wasn’t happy with the way psychology was being done in the mainstream, which has largely drawn upon the natural sciences and defined itself according to hypothetical deductive methods with measurement and quantitative analysis.”

Wertz’ position in psychology is that of a humanist. He believes that studying the lived experience of human beings “in a very faithful, close and descriptive way” is an important path to developing psychological knowledge.

Though he does acknowledge that there are limits to qualitative analysis, Wertz said he believes in the necessity of using multiple methods in psychological research.

So, in a move to increase psychologists’ understanding and familiarity with phenomenology and other types of qualitative analysis that are now gaining increasing attention, Wertz contacted leading experts in these approaches and asked if they would be part of a common project in which all would use different methods to analyze the same interview subject.

The person chosen for the project was a young woman, a music conservatory student in her 20s who was on her way to becoming an opera singer, but who was diagnosed with thyroid cancer.

“This was an hour-long interview in which she spoke about her experience getting cancer, her treatment and what took place as a consequence of what she thought was a terminal illness, but one she wanted to recover strongly from, and did recover from,” Wertz said.

While Wertz took a phenomenological approach and studied the woman’s descriptions, the other researchers used different qualitative methods to analyze the interview—discourse analysis, grounded theory, narrative psychology and intuitive inquiry.

In August, all five psychologists will present their findings and debate them at an American Psychological convention in Boston. The results will be published later in a collaborative book that Wertz described as “a comparative study of qualitative methodologies in psychology that will really help students, professors and scientists to understand the differences among these methods and to employ them.”

By carefully listening to, and reading a transcript of, the audio interview, Wertz was able to compose a deep analysis of this young woman’s life experience, which Wertz said was completely changed as a result of the cancer.

“This was a person whose self was built around her singing, yet she discovered all these other interests and talents that she never knew she had,” Wertz said. “She was a person who hadn’t depended much on others emotionally and socially yet what came out of this is she fell in love and got married.

“She lived her life to the fullest in the face of death,” he said. “It was really profound.”

Yet the discourse analyst came away with something different.

“It was perhaps the least like my own,” Wertz said. “I found that analysis to be surprising and very interesting.”

Discourse analysis focuses on the language a subject uses, deeply analyzing the words, grammar, rhetoric and other forms of expressions used to create psychological realities.

“(This psychologist) tuned into the way in which the participant in the research downplayed and minimized the strength, resourcefulness and helpfulness of other people in her world and instead, in her speech, built up herself, her capabilities and her own resources to meet the challenges of her life,” Wertz said. “She offered this as a partial psychology of how a person might cope with tragedy in their lives; their resiliency and ability to handle life-threatening trauma would take form through language expressing self enhancement and minimization of others.”

In contrast, Wertz’ approach, which he said was more comprehensive in analyzing the subject’s whole experience, focused on various forms of social relatedness that took place in a process of life transformation. In the situation where the person was diagnosed with cancer, while broken down and weeping, her surgeon offered great encouragement and hope.

As for the way the research participant minimized the support of others during her illness, Wertz said it was a result of her life history, which she touched on during the one-hour interview.

“It was tied to the way her family had failed her in the past. She had to be a self-made person,” Wertz said. “Also, in contrast, what I saw in analyzing the total experience was a movement toward an increasing openness to the contributions of other people in her life.”

The differences and similarities among the five researchers in this project are a positive outcome, Wertz said.

“Science is really competitive in that we’re always looking for ways to promote our own methodology at the expense of others,” Wertz said. “But that’s not what’s happening here. In this project, we debate and learn in the process. What’s evolving out of this relationship is a respectful conversation about value and limits of each methodology—a multi-method collaboration that honors and even celebrates our differences while at same time understanding their limits.”