skip to main content
Return to Fordham University
You are at:Home»Inside Fordham»Scholar Argues for Expansive Study of Theology 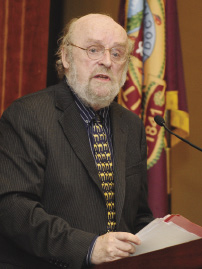 No Christian theologian can fully understand his or her area of study without possessing a thorough knowledge of other forms of Christianity, according to a guest lecturer who spoke at Fordham.

“To take on the responsibility of Christian theology today demands a willingness to be transformed by serious … study of at least the three major forms of Christianity—Orthodox, Catholic and Protestant,” said David Tracy, S.T.L., S.T.D., the Andrew Thomas Greeley and Grace McNichols Greeley Distinguished Service Professor Emeritus at the University of Chicago.

“Orthodox theology in its diverse and sometimes conflictual forms is distinguished by its profoundly contemplative character,” Tracy said as part of this year’s Orthodoxy in America lecture on Nov. 28.

He pointed out that the understanding of all forms of Christianity is grounded in a realized human experience of God.

Orthodox theology illustrates that realization in its beauty, liturgy and history, he said. It is particularly strong in its great tragic theology and Russian apocalyptic theology. The latter, Tracy said, is often unjustly left by the wayside by theologians.

“As Virginia Woolf observed in her splendid essay, ‘The Russian Point of View,’ reading the Russians makes one feel suddenly in another, far stranger and deeper world,” he said. “Woolf is surely right to claim Russian art and thought is pervaded, above all, by soul.

“The Russian soul in its arts and its theologies, with its accursed questions, has unnerved and nourished all humanity,” he continued. “That single gift is as great as the contemplative serenity of Greek Orthodox theologies.”

Tracy said that the greatest tragedy in theology is the split between spirituality and theology that occurred when the study of theology was moved from monasteries into universities.

“This 14th-century separation of theology and spirituality allowed the commentator traditions and the later neo-scholastic traditions to develop a mystical theology separate from theology proper.”

Tracy told the audience that the social sciences also play a role in understanding theology.

“All Christian theological understandings are contemplative intuitions, both informed by—as well as to be challenged by and to challenge—other basic religious intuitions and often philosophical, historical and social-scientific arguments.”

Hard sciences, such as physics, also contain a theological element. For example, recent advances in string theory call for a fresh outlook on cosmic theology, he said.

“As a theologian, I have never witnessed a stronger call for some new contemplative theology of the cosmos. I turn with hope, once again, to Orthodox theology, the most practiced of contemplative-cosmic theologies.”

The lecture was sponsored by the Orthodox Christian studies program at Fordham.