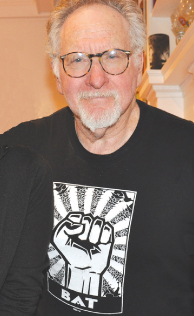 An education activist group co-founded by Fordham professor Mark Naison, Ph.D., is growing by leaps and bounds, in no small measure because of its brassy title.

Since the Badass Teachers Association was founded last June, the group has attracted more than 40,000 members on Facebook and has created chapters in all 50 states, Naison said.

Its mission is to reduce or eliminate the high-stakes testing and teacher evaluation policies that, organizers say, are draining creativity, fun, and authentic teaching and learning out of classrooms.

As for the group’s name? “Let’s just say it reflects teachers’ pent-up anger over being blamed for educational problems that are rooted in poverty and inequality,” Naison said. (In a politic bit of shorthand, members call themselves BATs.)

“Teachers felt like they were being made the scapegoats,” said Naison, a professor of African-American studies and history. “When people are beaten down on, stigmatized, and blamed for everything—which is what is happening to public school teachers nowadays—fighting back with both a message and with humor really energizes people.”

In the words of Naison’s co-founder, Priscilla Sanstead, a parent activist in Tulsa, Okla.: “If there were a Facebook group called ‘Vexed Teachers Raising Their Hands Quietly,’ how would that group go anywhere?”

Humor aside, the group has a serious purpose, Naison said: fighting policies that impose “a tremendous amount of testing.”

The resulting pressures are counterproductive, he said. “What makes the United States a successful society is our creativity, our innovative thinking, our entrepreneurship, our openness to new ideas, and a lot of that is being lost by this very rigid, test-driven curriculum.

“If you put that much emphasis on testing, you crowd out the things that make people enjoy school,” he said. “There are a lot of art, music, and computer teachers in our group, because those are the kind of things that are pushed aside.”

State chapters range from 50 to 1,700 people, and the total number of members fluctuates, Naison said. He estimated that up to 100,000 people have been involved in the organization at one time or another since its inception.

Members speak at public forums, testify before legislatures and city councils, and support candidates for public office, among other activities, he said. They’re also trying to bring 10,000 people together for a march on the U.S. Department of Education in Washington, D.C., in July.

The movement is greatly enhanced by social media, particularly Facebook and Twitter, said Marla Kilfoyle, a teacher in Oceanside, N.Y., and general manager of the group. One Twitter campaign, using the hashtag #evaluatethat, focused on teachers’ extra efforts that are not reflected in teacher evaluations tied to test scores. She and Naison get dozens of member messages a day, some of which result in new campaigns, she said.

“We have no problem calling people out, and we’ll [continue to]do it through social media,” Kilfoyle said.