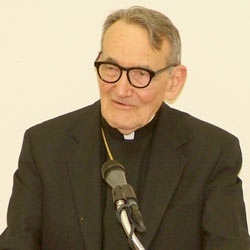 The words “sapientia et doctrina” are emblazoned on the Fordham shield. I have long suspected that the formula is taken from the Bible. With this in mind, I “googled” it and found only one reference. The Book of Ecclesiastes, sometimes called Qoheleth, states, with characteristic pessimism: “Sometimes a man who has toiled with wisdom and knowledge (sapientia et doctrina) and skill must leave all to be enjoyed by a man who did not toil for it. This too is vanity and a great evil” (Eccles 2:21, RSV). The translation in the New American Bible likewise uses the words “wisdom and knowledge.” Whoever devised Fordham’s motto, I imagine, wanted to use a biblical phrase to lend the motto an aura of authority, but was not greatly concerned with the original context.

It would be possible to translate doctrina as “doctrine,” but that is not the first dictionary meaning of the term. I prefer to stay with “knowledge,” therefore, without denying that the author of the motto may also have wanted to suggest that Fordham had a mission to instill right doctrine.

The term sapientia is relatively unproblematic. It certainly means wisdom. The wise man, according to Aristotle, knows all things, not in detail, but in their most fundamental characteristics. Wisdom or philosophy, he says in his Metaphysics, is the highest and most honorable of all sciences because it approximates the knowledge of God, who has comprehensive understanding of the causes and ends of everything that exists.

The motto may be taken as a corrective for education which is too specialized and fragmented. Although particular fields of knowledge certainly have a place in the curriculum, due attention should also be given to questions of ultimate meaning. This point was powerfully made by Cardinal Newman in his The Idea of a University. He praised philosophy as a meta-discipline embracing truth in all its aspects. Pope John Paul II in several important documents made similar statements. In his Apostolic Constitution on Catholic Universities, Ex corde Ecclesiae, he wrote: “By means of a kind of universal humanism a Catholic university is completely dedicated to the research of all aspects of truth in their essential connection with the supreme Truth, who is God” (§4). A little later he said: “It is also necessary to work towards a higher synthesis of knowledge, in which alone lies the possibility of satisfying the thirst for truth which is profoundly inscribed on the heart of the human person” (§16). This “higher synthesis of knowledge,” I take it, corresponds to the idea of wisdom in Fordham’s motto.

The most extensive analysis of the motto I have seen occurs in a presidential address by the Reverend Robert I. Gannon, S.J., delivered on September 17, 1941, celebrating the centenary of Fordham’s foundation. Translating the Latin words of the motto as “wisdom and information,” he contended that the formula gives primary emphasis to wisdom by placing it ahead of information. In his lecture he portrays the formula as a protest against the German university system with its strong devotion to empirical science and progress. Father Gannon sees the Catholic or Jesuit universities as bastions of Christian humanism. Among the liberal arts, he singles out the disciplines of theology, philosophy, history, and literature as “wisdom studies.”

Fordham’s motto could be read simply as requiring both wisdom and information, without giving any particular priority to one over the other. It does not indicate that the physical and social sciences should be placed on a level below philosophy and theology. Father Gannon’s interpretation of Fordham’s motto was undoubtedly influenced by his own devotion to the liberal arts and Christian humanism. But I would wish to align myself with him in the tradition of Aristotle, Newman, and John Paul II. I believe that for students who have the necessary aptitudes, the university can perform no better service than to give them a humanistic and liberal education. In a Catholic university, moreover, one may expect the curriculum to be permeated by Christian beliefs and values. The formula “sapientia et doctrina,” flexible though it be, can be read as supporting these goals.