skip to main content
Return to Fordham University
You are at:Home»Inside Fordham»Sapientia et Doctrina: Passing On the Tradition 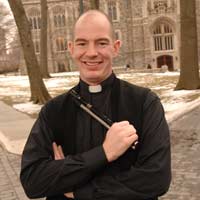 When I was a little boy, I learned that the best answer to the question, “Ryan, what do you want to be when you grow up?” was the enthusiastic reply, “A priest!” Such a response earned me a pat on the head, a beaming glance and a couple of quarters from my grandfather. Secretly, however, I harbored another desire: I wanted to be a professional Irish musician.

Fast-forward about 20 years. I am now a Jesuit studying for the priesthood at Fordham. I continue to travel the world playing accordion for Irish dancing competitions known asfeiseanna. I even teach a course titled “Introduction to the Irish Tin Whistle” in Fordham’s Irish Studies program. It seems that the innocent response of an eager-to-please little boy turned out to be a prophecy that is being fulfilled.

I often joke that I had to forsake the life of a rock-star accordion player to become a Jesuit. Actually, the opposite is nearer to the truth. Only by becoming a Jesuit did I fully grow into the Irish musician I was capable of being. My tin whistle students may guffaw at this claim. Didn’t they hear me complain each week that I didn’t have enough time to practice, to learn new tunes?

Allow me to explain. As a young musician, I was always after the next musical conquest—the next competition; the next difficult tune learned; the next movement mastered. My self-assessment as a musician rested upon what I could do with the instrument. My expectation was that people would look at my skill and judge me favorably because of it.

After I entered the Society of Jesus in 2004, I made the Spiritual Exercises of Saint Ignatius Loyola. This 30-day retreat is an intense period of prayer-guided encounters through which retreatants come to know, love and commit themselves to the service of God’s kingdom as disciples of Jesus Christ. Through the Exercises they see themselves as individuals in the midst of an unfolding story of God’s love and humanity’s rejection of it. They realize more fully their role in the history of God’s narrative of creation and salvation.

What, then, of Irish music? As I reflected upon my call to discipleship, I saw a parallel in my own musical heritage. The tunes that I played—the reels and jigs I learned and used to show off my skills—were written and performed by generations of musicians before me. My great-grandfather and great-aunt played these tunes; my immigrant teachers played these tunes; and now my students play these tunes. I recognized that my place in the Irish musical tradition is not as its greatest exponent, but rather as a steward who passes along what he has received from that tradition. With that realization, I ceased merely to play an Irish instrument and became the Irish musician I had always wanted to be.

The job of educators at a Jesuit university is not so different. Ours is a tremendous inheritance of wisdom that has been passed down through the Church for two millennia. Just as traditional music finds new expressions when it encounters new musical contexts, so we have the duty and privilege to help the next generation find its place within the Church’s tradition.

When I teach my tin whistle students, I begin with the basics—how to hold the whistle, how to cover its holes and how to blow it so it doesn’t make shrill noises. Then I build up a foundation of basic tunes—marches, polkas and carols—and begin to introduce various ornaments. As the students progress in difficulty, I encourage them to imitate me. The goal is not that they “play like me,” but rather that they learn the basics. This prepares them to expand the boundaries of the tradition through their own creative engagement with the music.

This is a challenge for any student. On one hand, there is a temptation to adhere to a rigid musical dogmatism that proclaims, “This is the only way it has ever been done! We can’t change it!” On the other hand, there are students who feel it is their right to impose deranged interpretations with the rejoinder, “I’m just being creative.”

A middle way, I suggest, is preferred. Students must learn the tradition and how a tune has been expressed in the past. Only then are they in a position to engage creatively and fruitfully with the music in a way that adds to the living tradition.

Whether we teach history, theology, biology or tin whistle, the burden and blessing is the same: We must hand on faithfully what we have received and equip our students to express what they have been given in new contexts. As I tell my students, my hope is that each one will find a way to claim his or her voice in the Irish tradition. My job is not to give them that voice. My job is to help them find it within themselves.

The aim of a Jesuit education is nothing less: We help women and men claim their places within a larger tradition so that they can meet the demands of the world with fidelity to their roots and enthusiastic engagement with the future.