Joseph Koterski, S.J.
Associate Professor and Chair of the Department of Philosophy 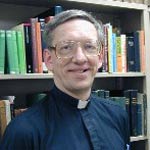 Saints are made, not born. In the case of St. Thomas More, patron saint of statesmen, we have a particularly appealing saint and a lesson in how to cooperate with the divine craftsman.

Robert Bolt’s A Man for All Seasons tells the story of More’s courage in standing up for the faith and resisting King Henry VIII. In More’s own words, he always wanted to be “the King’s good servant, but God’s first.” How did he come to this resolve?

The story of the composition of his most famous work, Utopia, sheds great light on the question and can readily be a case study in Sapientia et Doctrina. Before entering Henry’s service at age 40 in 1518, More prepared himself by means of a literary exercise in the spirit of the new Renaissance humanism that he loved. As a young man, he had tested the idea of a monastic vocation but decided instead to marry. He had studied law at the Inns of Court (his father’s idea rather than his own) and then been elected to Parliament. Even as a boy, serving as a page for Archbishop John Morton, then Chancellor of England, he had seen the give-and-take of political life from close at hand.

The setting of Utopia is a trade mission to Bruges and Antwerp that More made in 1515. In the second book we hear the story of the distant island that gives More’s work its curious name. By precisely the kind of play on words that the humanists loved, “Utopia” could refer to “the best” of all places, or to “no place.” But for More this was serious wordplay. The idyllic setting that More’s new friend Hythloday (whose name means “nonsense”) describes is a paradoxical combination of economic arrangements and political structures that promise to deliver a heaven on Earth, so long as one gives up any personal opinions and private fortunes.

The first book, however, gives some important clues to More’s project in the whole volume. In recounting how More came to meet Hythloday and how he persuaded him to tell the story of his adventures (including his voyages with Amerigo Vespucci!), the first book shows More urging Hythloday to share what he has learned about the Utopian way of doing things with the rulers of old Europe. Hythloday utterly refuses to consider the idea of becoming involved in government on the grounds that kings are more concerned with adding to their territory and their treasuries than with governing well what they already command, and that their courts are filled with flatterers who would never pay any attention to the ideas about political philosophy that he would bring.

In the give-and-take of their conversation, the character More pleads with Hythloday to recognize that politics is always the art of the possible. Where Hythloday is unwilling to enter the fray and prefers his own version of the ivory castle, More insists that political progress can come through compromises, but that one needs to know where one may compromise and where one may not. It is not hard to see the two characters here as two voices in More’s own mind as he weighs the prospect of joining Henry’s service.

In the course of the second book, the scenario Hythloday describes seems to be an ideal republic, in the tradition of Plato. But when one outlines the principles on which this Utopian society is founded, it turns out to involve the systematic denial of the non-negotiable principles of a Christian polity that More had learned from Augustine. He had lectured on Augustine’s City of God in 1501 and often quotes from this book in other writings. In place of the charity that ought to characterize a Christian society, Utopian society promotes a refined hedonism and self-interest. The Utopians, Hythloday explains, do not act morally from love of God or their fellow men, but from fear of punishment and love for the maximization of their pleasure. The Utopians deny free will as the source of evil in the world and treat the traditional arrangements for private property rather than personal sin as ultimately responsible for all social and individual ills.

In short, the allegedly ideal city of the second book of More’s Utopia is a mock ideal. It is his vision of what would result if one were to deny any of the non-negotiable principles on which society must be governed and on which Christians who enter politics need to base themselves. Interestingly, the historical record of More’s work in Parliament and later his service as the first layman to be the Lord Chancellor show no signs of any willingness on his part to introduce any aspect of the radical program contained in the second book of the Utopia.

Rather than imagining that More was some failed politician who could not deliver on his program, it seems much better to read that program not as More’s own, but as his effort to prepare himself for office. As a kind of laboratory in the imagination, the social and political arrangements of the island of Utopia were his way of envisioning what would happen if one were to compromise on some matters of principle.

No statesman can foresee all the complications that life and politics will present. But to be a saintly statesman, ready to be the King’s good servant, but God’s first, More did try to prepare himself. In the true fashion of Renaissance humanism and its love of irony, he pictures for himself in the Utopia the consequences likely to follow if he were to treat some matter of principle as if it were a matter of legitimate compromise. The sad results of the experiment, done with the best of intentions and the noblest of motives, show forth the principles that he will need to observe at all costs in later life.