skip to main content
Return to Fordham University
You are at:Home»Inside Fordham»Sapientia et Doctrina Another Way of Knowing 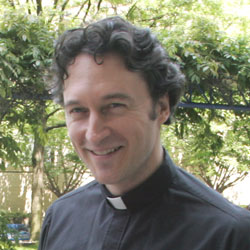 Cardinal Dulles pointed out in the first column of this series that “although particular fields of knowledge certainly have a place in the curriculum, due attention should also be given to questions of ultimate meaning.” Since their origins, Jesuit schools have found theater to be an important means in giving this kind of attention. The Jesuit schools have given to the theater some of our best students: Moliere, Racine, Corneille, Calderon de la Barca, and Goldoni. These artists in turn have inspired even more questions with their works and have accompanied us in our search for meaning. However, the theater has not been accepted without suspicion.

A dichotomy of views about the place that the theater has in education has existed since Plato and Aristotle. Plato regards all such artistic pursuits as “imitation” and “thrice removed from the truth.” As a deliberate descent from the world of the forms, “all poetical imitations are ruinous to the understanding of the hearers” (Republic Book 10). Aristotle offers a corrective in The Poetics. He points out that theater is an imitation, not of a thing but of an action. As such it can be an excellent way to learn from the actions of others without having to suffer the consequences ourselves.

Jacques Maritain speaks of a kind of knowledge that “is not preliminary to or presupposed by the creative activity but is intimately one with it, consubstantial with the movement toward the work; and it is properly this that I call poetic knowledge.” It is a knowledge apprehended in a doing or in a making.

Following the theatrical practice of Konstantin Stanislavsky’s later writings, we teach young actors to look at the text of a play and decide on a very specific “score of actions” for the character. Placing themselves in the mind and situation of the character to be portrayed, they ask “what do I want?” and “what do I do to get what I want?” In answering these questions they arrive at an articulation through a doing of the character’s “objective” and “action.” Stanislavksy has the actor employ both the passive imagination (placing myself in the scene) and the active imagination (having agency within the scene.) In this way the actor creates a character by the experience gained through the tool of the imagination.

Similarly, in the Spiritual Exercises of St. Ignatius Loyola we have an excellent way to “rehearse” this other way of knowing and, in doing so, to “experience divine things.” In Ignatius’ way of contemplation, I consecrate my imagination to the One who has given that very power to me. I believe that God will be present in my engaging the imagination and the senses as I place myself in the scene of the Scriptures that I am contemplating. In this way I experience the Scriptures, not just read them. This way of knowing allows me to enter into the scene more profoundly.

This use of imagination, of creative intellect, of poetic knowledge has applications for our “Cura Personalis,” our care of the whole person. As we aid our students in their personal growth we can encourage them to employ this way of knowing. It can be a way of coming to know myself, to be able to articulate what I want to become, and to be able to discern a course of action that will assist me in the process of achieving this objective. It can help the student to better empathize with others by imagining what it would be like to be other.

In his 1999 “Letter to Artists,” John Paul II wrote, “all men and women are entrusted with the task of crafting their own life: in a certain sense, they are to make of it a work of art, a masterpiece.” We come to know ourselves by what we do. We shape ourselves and make ourselves each and every day with what we imagine ourselves to be, with asking who we want to become, and with deciding on a course of action to achieve this.