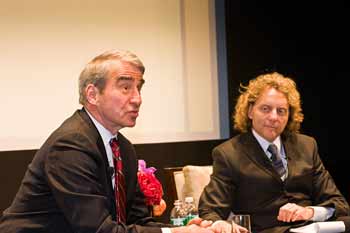 The exploits of fictional New York City Assistant District Attorney Jack McCoy were front and center on Nov. 19, as actor Sam Waterston sat down to discuss his portrayal of one of television’s most famous lawyers.

The actor drew a packed house to the Time Warner Center, where two overflow rooms accommodated those eager to hear the thoughts of the star, a regular on Law & Order for much of its 19 seasons.

“Atticus Finch in the Flesh: A Conversation with Law & Order’s Sam Waterston,” was presented by the Forum on Law, Culture and Society at Fordham Law.

As McCoy, Waterston appears in gripping courtroom scenes that sometimes show him victorious in his prosecutions, but not always. That uncertainty is part of what makes the show successful, he told Thane Rosenbaum, director of the forum and John Whelan Distinguished Lecturer in Law at Fordham.

“Maybe people just think the question of what’s fair is endlessly fascinating, whether it turns out that a particular episode seems to have come to a fair conclusion or not,” Waterston said. “Either way, the appetite is still the same.”

Rosenbaum noted that stories of fairness have been a staple of history, including the Old Testament story of Job. Waterston, who was nominated for an Oscar for his role in the movie The Killing Fields, embraced the comparison.

“Job is sort of a Law & Order, because the question of how to define justice remains unanswered. Isn’t God’s statement to Job, ‘Shut up, I’m God’?” he said.

“Job’s response to the way he’s experiencing life is what we hope to evoke in the audience, which is ‘This is not right; surely it could be run better!’” Waterston said. “We’re doing a public service, because if it whets people’s appetite for real fairness, then it’s doing a good service.”

The conversation was interspersed with clips of some of Jack McCoy’s most powerful courtroom scenes, including ones of him going after a reckless gun manufacturer and a pedophile. His character’s prosecution of the latter leans dangerously close to being too zealous, prompting Rosenbaum to ask whether Waterston ever disagreed with a decision his character made.

“I made a whimsical decision early on, which was to unquestionably embrace whatever position the writers thought Jack McCoy ought to have, and to only argue about whether the way it played out was credible,” Waterston said.

The most poignant part of the evening came when Waterston was asked about Jerry Orbach, who played Det. Lenny Briscoe on the show for 12 years. Although Orbach died of cancer in 2004, Waterston said he was still very much alive in his heart.

“I only know one joke, and it’s because he taught me one that stuck. It’s extremely simple. A horse walks into a bar and the bartender asks, ‘Why the long face?’ It’s perfect for me because it’s so little to remember,” he said.

“Montaigne said that illness and pain makes us all small,” he continued. “We can all be brave in the face of death, but being incapacitated and in pain, we all become shrimps. Except for Jerry; he didn’t. He was just a fabulous guy.”