skip to main content
Return to Fordham University
You are at:Home»Inside Fordham»Rte 66: Ghosts of an American Mythology 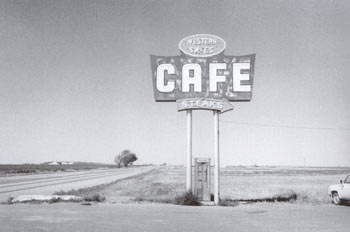 The American road trip, already its own institution, leaves from the city, travels through the land and returns to the city. In the City andThe Mother Road: Route 66, a photography exhibit that recreates the road trip through images, runs through Feb. 10 in the Center Gallery, Lowenstein Center, Lincoln Center campus.

The two-person exhibition of 35-millimeter photography features 18 color and 130 black-and-white photographs by artists Doug Muir and Michael Putnam, juxtaposing urban views with scenes from middle America and exploring peoples’ relationships to public sculpture. Curator Joseph Lawton, M.F.A., clinical associate professor in the Department of Theatre and Visual Arts, displayed Muir’s large color prints of urban spaces at either end of the gallery, connecting them with Putnam’s small, postcard-like images along Route 66, to create a cinematic journey across time, space and recent history. Muir’s images are contemporary; Putnam’s road trip mythologizes the American landscape of the mid-1970s.

“These photos are straight, smart, understated lyrical works,” said Lawton. “They are images pulled from the real world, describing the real world. They provide a natural history show. The two sensibilities—the city and the road—bounce off one another both in scale and in subject.”

The uniqueness of these artists’ 35-millimeter works, Lawton said, lies in the fact that there has been no altering of the imagery, as is common practice with today’s digital imaging.

“The sculptor Rodin said ‘what is made with time, time respects,’” Lawton said. “In these photos the clothing has changed, signs have changed, the cars have changed. And because of time passing, we see everything with a fresh eye.”

Putnam’s work features a black-and-white photo essay of his road trip across Route 66 during the mid-1970s. The infamous road, which John Steinbeck called the “main migrant road,” ran from Michigan Avenue in Chicago to the junction of Santa Monica Boulevard and the Pacific Ocean, before the route was retired in 1985, made obsolete by superhighways. Putnam has traveled extensively in the U.S., documenting everyday life in small towns and rural areas.

Like the great photographers Walker Evans and Henri Cartier-Bresson, Lawson said, these two contemporary artists’ works make the art “almost transparent—it doesn’t call attention to itself. The deeper you look into the spaces, the more information is layered there,” Lawton said.
The Center Gallery offers 8 to 12 shows year, all curated by Fordham faculty and students from the Department of Theatre and Visual Arts.