skip to main content
Return to Fordham University
You are at:Home»Inside Fordham»ROTC Cadets Take Learning Out of the Classroom 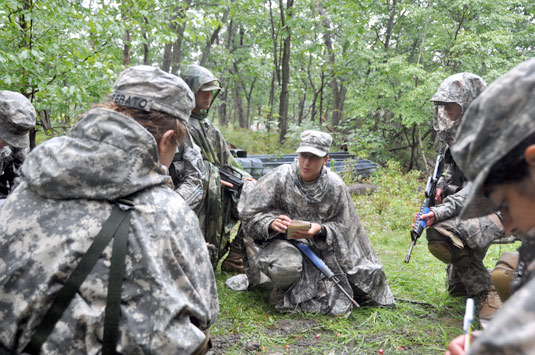 FCRH junior Marina Codraro explains the objective of an upcoming Situational Training Exercise to her squad.
Photo by Joseph McLaughlin

Marina Codraro is leading a squad of U.S. Army soldiers down a rain-soaked dirt path that cuts through heavily wooded terrain.

As they reach a bend in the trail, an enemy hidden deep within the forest opens fire. One soldier falls on the road.

Codraro directs her squad to take cover and move into the woods. The soldiers perform a flanking maneuver to isolate where they believe the enemy is hiding, but soon realize they are being fired on from two locations. Another solider is killed before the Army squad can put down the enemy fighters.

This scenario was not real. It played out as part of a Situational Training Exercise (STX) in which the soldiers use fake firearms called “rubber ducks” that do not shoot. It is one of the many drills designed to sharpen the leadership skills of cadets in the Army Reserve Officers’ Training Corps (ROTC).

The squad commanded by Codraro, a junior in Fordham College Rose Hill (FCRH), was made up of incoming Fordham ROTC students on the last day of their weeklong freshman orientation this past August.

Fordham is the headquarters for the ROTC at roughly 50 nearby colleges and universities. Outdoor training complements the mandatory military science and leadership classes that add an extra level of responsibility to college life for cadets. 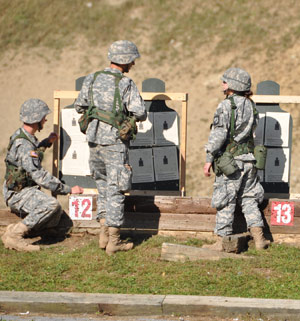 Cadets check their marksmanship on the firing range at Camp Smith.
Photo by Joseph McLaughlin

Now in its second year, freshman orientation gives cadets the chance to learn many of the basic military skills before they arrive on campus. The week before classes began, Fordham freshmen joined others from colleges and universities around New York City and the Hudson Valley in Tuxedo, N.Y., for their first taste of military training.

The group of roughly 45 cadets learned how to enter and clear a room; provide cover fire through exercises with paintball guns; secure an area after it has been occupied; and hone their aim in a high-tech computer-simulated firing range at West Point, among other experiences.

“After last year, we found that the new cadets who went through freshman orientation were better prepared for the semester and more cohesive than those who did not attend,” said Maj. John B. McBride, the executive officer of ROTC at Fordham. “We also found that the drop out rate was much lower for cadets who attended orientation.”

McBride added that freshman orientation is meant to provide the new students with necessary skills, but not make them regret their decision to join ROTC. That did not prevent some of the battle-trained instructors from speaking frankly to the cadets, especially when they lost focus during a drill.

“These are your enemies. These are your mortal enemies, and they will be your enemies even after you kill them,” said Cadet John McClelland, an ROTC assistant instructor who spent five years as a special operations combat medic in Iraq and Afghanistan with the 1st Ranger Battalion before beginning his collegiate studies.

After a four days of training and a night of sleeping outdoors, the cadets were still enthusiastic, answering each command from their instructors with a hearty “Huuuuh!” which is a response of affirmation in Army lingo.

“I was expecting the week to be difficult and challenging, and it turned out to be that and more,” said Michael Cavanaugh, a freshman in FCRH. “We’ve been learning a lot of tactics that I know will help me later in my career.” 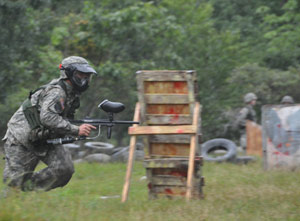 An ROTC cadet runs to a secure position while another cadet lays down cover fire.
Photo by Joseph McLaughlin

For Codraro, who volunteered to assist with freshman orientation, the week marked the end of a summer filled with ROTC activities. She chose to earn the U.S. Army Parachutist Badge through a three-week course at Fort Benning, Ga. Although the training is optional for ROTC cadets, Codraro wanted to conquer her self-professed fear of heights. The first week of airborne school teaches ground training—how to land properly. In the second week, trainees practice falling off of a tower, and the final week brings five live jumps—one at night—that lead to the parachutist badge.

“I did my jumps and I was terrified at every one. But I did it, and now I have my wings,” she said.

Other training opportunities offered by the Army gave her little time to enjoy the summer with family and friends, which may not be such a bad thing.

“I feel a lot more confident going into my junior year,” she said. “ROTC kept me in the military mindset all summer, so I didn’t develop any of the laziness that comes between school semesters.”

At the end of September, the full Fordham ROTC battalion participated in the first outdoor training weekend of the semester at Camp Smith in Cortland Manor, N.Y. In addition to rappelling and conducting target practice on a live-fire range, the cadets traveled to West Point for a series of teamwork exercises in which they had to move objects over, around, past and through various obstacles. For cadets, such outdoor training weekends occur twice each semester. 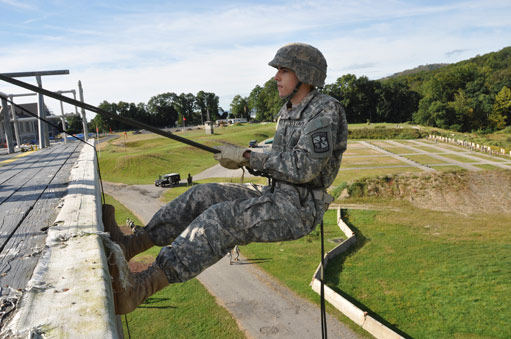 An ROTC cadet prepares for his first rappel at Camp Smith in Cortland Manor, N.Y.
Photo by Joseph McLaughlin

“I love every bit of it,” said FCRH freshman Tyler Boucher, who credits a longtime mentor and family friend—who is now serving overseas—with encouraging him to join the ROTC. “I feel blessed to be in this country and to have what I have. Joining ROTC was the best decision I could have made.”