skip to main content
Return to Fordham University
You are at:Home»Inside Fordham»Rose Hill Student Finds Meaning at the Intersection of Biology and Classics 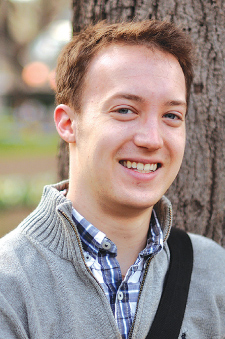 Stephen Gan takes inspiration from the classics, from which is derived one of his favorite words: polytropos.
Photo by Tom Stoelker

Polytropos is a Greek word in The Odyssey that means many twists and turns, and for Stephen Gan, it is a fitting term to describe his Fordham career.

Gan, who will be receiving his bachelor’s degrees in biology and classical languages, has always found ways to combine his two greatest interests: medicine and language.

“I always knew I wanted to be a doctor and, luckily for me, every medical term is derived from Latin or Greek so I’m able to apply both skills in my day-to-day life,” he said.

While the link between biology and classics is not an obvious one, for Gan, the connection could not be clearer. Latin and Greek are verbal puzzles that require an analytical way of thinking—one that Gan is already familiar with.

“Dissecting Latin and Greek sentences hones your ability to analyze data and interpret it in a way that no other study can do,” he said. “Biology requires a similar level of logical cause-and-effect thinking, so it’s easy for me to switch gears.”

Gan was able to apply his medical studies to a real-world setting when he started working for Fordham University’s Emergency Medical Services (FUEMS).

During his sophomore year, he became certified as an EMT specialist, and operated and rode in the FUEMS ambulance for several semesters.

“It was a rush driving a three-ton hunk of metal,” Gan said of his experience in the ambulance. “Going through red lights went against every instinct in my body.”

Gan remembered a particularly difficult call that he responded to, in which he had to console a student who was in an emotionally fragile state.

“It was one of those moments you can’t really put into words no matter how many words you know in any language,” he said.

Later in the year, Gan left FUEMS to work as a pediatric residents’ assistant at the Children’s Hospital at Montefiore, and it was an experience that reaffirmed his passion to be a pediatric oncologist.

“It was great to be able to work directly with the patients,” Gan said. “After working there, I could not be any more certain of the fact that this is what I want to do.”

Alongside his medical training, Gan has also been able to put his language studies to practical use. This past semester, he has been helping out with the Latin curriculum at the South Bronx Classical Charter School as part of a service-learning course.

“It’s one of the most rewarding experiences I’ve ever had at Fordham,” Gan said.

While Gan has often considered becoming a Latin or Greek teacher, he sees medicine as his ultimate calling and is preparing for medical school post-Fordham.

“Even though I think about how amazing it would be to become a teacher, I believe I can leave the world in a better place as a doctor.”

Another aspect of classic Greece that has trickled into his everyday life is running marathons. Currently, Gan is training for his third marathon, which will take place in Scranton, Pennsylvania. Running, he said, brings everything back to his favorite Greek word: polytropos—which also means “man of many devices.”

“When you run a marathon you are confronted with a lot of twists and turns,” he said. “I think that’s why I find such comfort in running.”