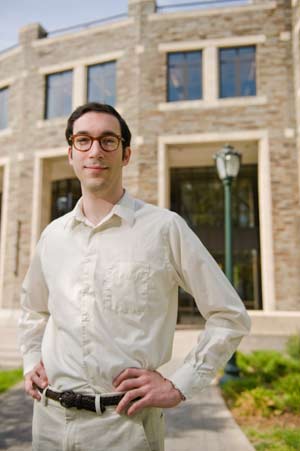 Medicine means more than just anatomy and physiology to senior Marc Tambini. The next major medical breakthrough will be important not only for scientific reasons, but for the simpler goal of making people feel better.

“A lot of the big discoveries remain to be discovered,” said Tambini, who majored in biology in Fordham’s pre-med program and will pursue an advanced degree at Columbia University this fall. “It’s something that’s interesting to me not only on a scholarly level, but also because a lot of good can come from research in terms of developing new therapies or diagnostics.

“I also get to stay in school for eight years,” Tambini said with a laugh, “and delay my entry into the real world.”

A native of Pelham in Westchester County, N.Y., Tambini already has plenty of real-world experience. Last summer he worked on developing a vaccine for cytomegalovirus at the Hannover Medical School in Germany, and the year before that he was part of a research team at Memorial Sloan-Kettering Cancer Center in Manhattan.

Tambini is also the co-author of a paper describing two novel strains of the bacteria that cause leprosy, and has assisted Fordham professor Berish Rubin, Ph.D., in his work on Alzheimer’s Disease. Tambini helped Rubin learn what effects digoxin, a heart medication, have on RNA splicing.

“It’s interesting on a scientific level, but we’re considering it as a potential therapy for Alzheimer’s, so there’s a very real practical aspect to the research,” he said.

An avid chess player, Tambini co-founded the University’s chess club in his sophomore year. He was surprised that there was not already a chess club on campus, so he and a few friends took it upon themselves to start one.

“It’s just a fun thing to do,” he said, though he added that chess and medicine tend not to mix well, since chess takes time from his studies. “It’s probably an antagonistic relationship,” he joked.

At Fordham, Tambini found his professors to be extremely likable inside the classroom and just as helpful outside. For starters, he noted the huge amount of paperwork required to attend medical school and the hours of assistance that professors offered him and his classmates to make sense of that mountain.

Tambini also found the environment conducive to academic pursuits, especially when compared to what many of his friends were facing at other colleges. A pre-med program can be extremely competitive, he said, but at Fordham such an atmosphere was discouraged.

“There’s a mean-spiritedness that you can find at other colleges, and it’s easy to fall into that trap when you’re doing something as competitive as applying to medical school. I haven’t found that here,” Tambini said.