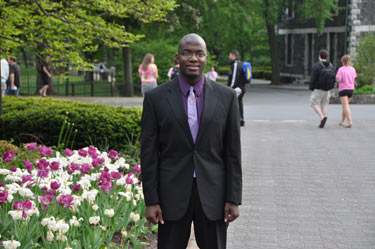 Dwayne Kelly works at Christian Prayer Mission International, where he helps students stay out of gangs and stay on track for college.
Photo by Chris Gosier

It was a tap on the shoulder and a one-word comment that brought a weighty lesson home to Dwayne Kelly: getting an education was going to be a lot of work.

He was a student at Westchester Community College, trying to come back from several years of neglecting school. His English teacher was handing back papers to students, giving comments as she went.

For him, she had just a tap on the shoulder, and one word: “whoah.”

That’s one moment that stands out for Kelly as he looks back on his long journey to academic excellence and the promising future he faces as a Fordham graduate. Before he could learn academic subjects, he had to learn hard lessons that brought home to him the importance of education.

His family immigrated from Jamaica and settled in the Bronx when he was in junior high. Looking back, he said, he didn’t understand the necessity of doing well in school.

As a new immigrant trying to fit in, he fell in with a gang, but quit when members started dying. He was a marginal and disruptive student at DeWitt Clinton High School. When he applied to colleges, no four-year institution would accept him.

“That’s when I decided to settle down and take things really seriously,” he said.

He enrolled at Westchester Community College, where he responded promptly after his English teacher tapped him on the shoulder.

“I went to her office right after class and said, ‘Obviously I can’t write well. What can I do to do better?’”

With the teacher’s help, he furiously applied himself to improving his writing. He spent another six semesters striving academically at Westchester, and won a Jack Kent Cooke Foundation scholarship that helped him enroll at Fordham in fall 2006.

He faced barriers to other financial aid sources because of his immigration status, however. After his first semester, he thought he wouldn’t be back.

“I had just taken my last final exam for the fall of ’06 and I was telling my professors, ‘I had a great time at Fordham. I was able to live my dream for a semester,’” he said. Later, however, an administrator caught up to him as he was leaving campus, and he learned that Fordham could provide more aid.

He has kept his grades high, and is graduating with an urban studies major and a philosophy minor. He has medical school ambitions, and is waiting on a fellowship that would help him realize them. He is also waiting on a green card, which would bring other financial aid possibilities.

In the meantime, he continues to work as youth program director for Christian Prayer Mission International in the Bronx, where he designs programs that help promising students stay out of gangs and stay on track for college. He wants to do something about the cycle of problems afflicting inner-city young people.

“It’s through education that we can break that cycle,” he said.