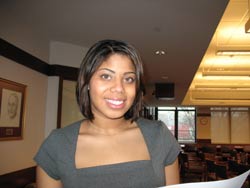 On Wednesday, Feb. 13, all eyes were on Fordham senior Chanel Cathey.

The communications and political science major spent much of the day in front of video cameras when Major League Baseball Productions came to Fordham’s Rose Hill campus to feature Cathey in a three-minute documentary.

The short film, which was shot as part of her honors as a Jackie Robinson Foundation scholar, premiered at the foundation’s annual awards dinner on March 3. Cathey was chosen from a field of 256 other foundation scholars nationwide to be featured at the event, which also will fete legendary record executive Clive Davis and Star Wars filmmaker George Lucas, said Allison J. Davis, the foundation’s director of public relations.

“Chanel was selected unanimously by the foundation and our corporate sponsors,” Davis said. “She epitomizes what the Jackie Robinson Foundation is all about in her scholarship, community service and leadership abilities. It’s amazing that someone so young is so accomplished and generous.”

Cathey is the 2007 recipient of a $10,000 Unilever Legacy of Leadership award through the foundation and is an Xavier Scholar through Fordham’s Campion Institute. While in high school, Cathey co-developed a program to help previously imprisoned teenagers, Our Piece of the Pie (OPP), in her home state of Connecticut.

Cathey serves as a Freshman Advisement Student Assistant (FASA) mentor for incoming students at Fordham College at Rose Hill. She is also president of Women in Communications.

“I’m not surprised that the Jackie Robinson Foundation is honoring Chanel as outstanding even among her fellow Robinson scholars,” said Brennan O’Donnell, Ph.D., dean of Fordham College at Rose Hill. “She’s an excellent ambassador for the foundation—and for Fordham.”