When Richard Giannone, Ph.D., first read the short stories and novels of the southern Catholic author Flannery O’ Connor, they packed such a punch that the young professor was thrown for a loop. 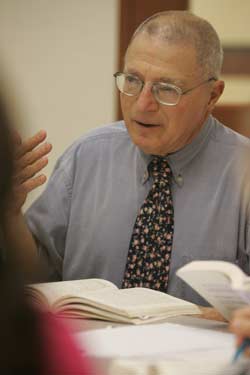 “I don’t think I was emotionally ready for the shocks and depths and even the strong theological implications,” he said of late writer’s stories. “She has the mind of a steel trap.”

Forty years, several essays and two books on O’Connor later, the Fordham English professor has been invited to lecture at a National Endowment for the Humanities-sponsored summer institute on the writer in July at Georgia College and State University, O’Connor’s alma mater. The school, which houses a large collection of her letters and original manuscripts, is located in Milledgeville, Georgia, where the writer lived as a teenager with her family.

Like many who have read the author, Giannone is in awe of her violent, grotesque characters and their painful reckoning with God’s grace — which, in O’Connor’s world, is far from the peaceful, beatified notion of grace we have come to take comfort in.

Giannone met O’Connor once, when he was a young professor at the University of Notre Dame and lectured there. By that time lupus, which claimed her life at age 39, had already relegated her to crutches. Giannone remembers a stuffed-shirt graduate student asking a question that seemed to go on for 10 or 15 minutes.

“Her response was dazzling. She just sort of propped herself up on her aluminum crutches, and she said, ‘Yes.’ The audience broke out into a roar of delight,” he said, laughing quietly at the memory. “She had a very quiet dignity and self-confidence.”

That was the beginning of what would be a 40-year relationship between the Fordham professor and O’Connor’s work. “But it took me a long time to immerse myself in her fiction,” he said.

From the first time he taught the short story, “A Good Man is Hard to Find,” in preparation for O’Connor’s Notre Dame visit, Giannone sensed that young readers did not know how to process O’Connor’s complete lack of sentimentality. (In the story, when an insufferably long-winded grandmother tries to show compassion to a serial killer who has just murdered her family, he shoots her three times in the chest. “She would of been a good woman,” he says, “if there had been somebody there to shoot her every minute of her life.”)

This sort of scene, said Giannone, is a far cry from the redemption tales often heralded in today’s spiritual writings. “It’s a kind of coldness in the fiction,” he said. “When you touch it’s like dry ice—you don’t know whether you’re burned or frozen, and students didn’t know how to take it.”

Giannone examined these severe representations of violence, love, and grace in his first book,Flannery O’Connor and the Mystery of Love (Fordham University Press, 1999). “Suffering is found at heart of love,” the publisher’s synopsis reads, “and is its hidden face, agonized and abandoned.” Giannone’s subsequent book, Flannery O’Connor, Hermit Novelist (University of Illinois Press, 2000), explored themes of ascetic spirituality found in her work, influenced by O’Connor’s 13 solitary years living on a Georgia farm during the author’s battle with lupus.

Giannone’s works on O’Connor take their place in a vast collection of books about the provocative author, roughly 80 in all. “O’Connor sells,” Giannone said, who has also published books on Kurt Vonnegut and Willa Cather. “While students (and others) can’t always wrap their minds around her themes, they certainly don’t shy away from them.”

The Cold War writer is also particularly relevant, he said, in a world where seemingly senseless crimes dominate the headlines (i.e., the recent shooting of Amish schoolgirls in Pennsylvania). If O’Connor were alive, Giannone said, such events would not have shocked her.

“She wouldn’t blink. This is the way the world is,” he said. “She would see in it the possibility of divine intervention and grace. But she was utterly fearless. And that kind of fearlessness brings about a particular kind of tenderness. It’s a very tough tenderness, but it keeps going deeper and deeper.”

Given O’Connor’s continued relevance, Giannone is not surprised that the National Endowment for the Humanities chose to fund the “Reconsidering Flannery O’Connor” 2007 Summer Institute at Georgia College. He will be one of six guest faculty invited to speak to the seminar’s 25 attendees, all O’Connor professors and researchers from English programs and divinity schools.

Giannone is not sure yet what aspect of O’Connor’s work or life he will discuss. One thing he is certain of, however, is that people will continue to embrace O’Connor and her startling theological themes, regardless of their own levels of belief and unbelief.

“Unbelief is an important aspect of belief,” he said. “People with canned answers, I don’t thinkthey have belief.” Often faith — in God, in the wisdom of complex authors — is about a struggle, he said. Understanding does not come all at once; rather, “Things take hold much later,” said the man for whom understanding of Flannery O’Connor has revealed itself over four decades.