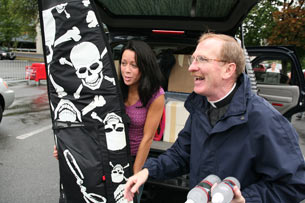 Katie Egan grew up surfing the waves of Newport, R.I. While the Rose Hill campus offers countless amenities, a beach is not one of them, but Egan had done her homework.
“In New York I can surf at Rockaway Beach, Long Beach or out in Montauk,” she said, “I’ll just take my surfboard on the subway.”
Photo by Michael Dames

As Fordham’s Class of 2010 began trickling onto the Rose Hill campus in cars, minivans and SUVs on Sunday morning, Aug. 27, the rain was there to greet them. Luckily, so was the University’s president, Joseph M. McShane, S.J.

Dressed in a blue windbreaker over his clerical garb, Father McShane handed out bottles of water and chatted with arriving students and their parents. “Where are you from?” he asked the driver of one minivan.

“You’ve got Jamestown’s 400th anniversary coming up,” Father McShane said with a smile. “Welcome to Fordham. You’re going to love it here. And don’t you lift a finger. Our students will handle everything.”

Despite threatening clouds, which doused the campus and its new students all day, Father McShane had reason to be upbeat. This year marks the first time in Fordham’s history that the overall acceptance rate dipped below 50 percent, putting the school in the elite company of roughly 150 schools across the nation. A total of 18,111 applications were submitted by students hoping for a seat in Fordham’s Class of 2010, of which the University accepted 46 percent— its most competitive year ever. 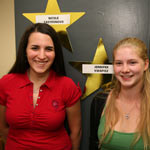 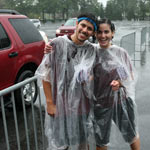 Sheets of rain were no match for the sunny dispositions of Orientation Leaders.
Photo by Michael Dames

As a National Merit Scholar semifinalist, Kwapisz is attending Fordham on a full-tuition scholarship. Kwapisz plans to study computer science, though she has not ruled out pre-law as a major. She also plans to keep playing the alto saxophone, clarinet and flute. “And I want to join the mock trial team and the band,” she said while handing her mother Kathie a stack of plastic clothes hangers destined for the closet of her double in Queens Court Residential College. 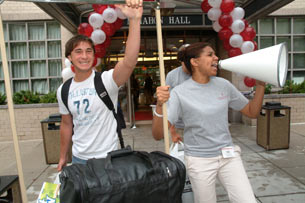 Nicole Castronovo, Kwapisz’s roommate, also received a scholarship covering full-tuition and fees. Hers came courtesy of J.P. Morgan Chase’s Thomas G. Labrecque Smart Start Scholarship Program, which awards 20 scholarships annually to graduating high school seniors from New York’s five boroughs and provides them with internships at the company during college. Like many of the incoming students, Ms. Castronovo wants to get down to business—literally—by studying accounting at Fordham’s College of Business Administration (CBA).

The University’s business curriculum also attracted incoming freshman and international student Luong Hai. Luong, who is Vietnamese but grew up in Bulgaria, said he came to Fordham because he wants to study finance and experience life in New York, which he described as “the most dynamic city in the world.” 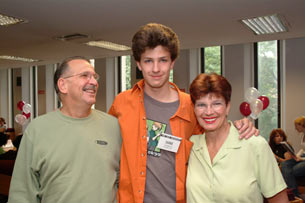 Commuter student Shane Connelly (center) FCLC ’10, flanked by parents Kevin and Anna at registration in Lowenstein Center. “My wife’s salary will go to paying Shane’s tuition,” said Kevin Connelly. “When he graduates I want him to take a job he wants to do, instead of taking any job because he’s worrying about student loan debt.”
Photo by Chris Taggart

On move-in day, Luong was impressed watching the squads of upperclassmen who volunteered to help move in his fellow students.

In front of Luong’s new home, Hughes Hall, upperclassmen hustled new students’ belongings into the residence hall. As soon as arriving cars with new students came to a halt in front of the hall, they were met by a call and response routine of “We are”… “Fordham,” and “Whose house?”… “Hughes House!”

A soaked undergraduate army in maroon t-shirts—current Fordham students who’d once arrived in the same state of excitement and anxiety —unloaded the computers, comforters and clothes, quickly delivering the familiar appointments of dorm life to the bare rooms inside.

In addition to setting a high-water mark in overall applications (19 percent higher than last year), this year Fordham succeeded in assembling one of the most diverse freshman classes ever, with increases in African-American, Hispanic and Asian students, both in sheer numbers and percentage of the class, which reached 27 percent for the incoming class of 2010. 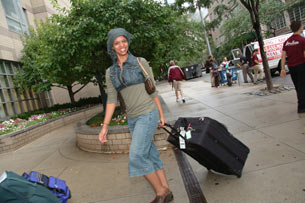 The rainy weather couldn’t dampen the spirits of Fana Tesfagiorgis, FCLC ’10, on her first day at Fordham.
Photo by Chris Taggart

“We’re always working on it,” Father McShane said. “Part of our strategic plan is to bring that percentage up to 30 percent, and we made good progress this year. It has been very heartening.”

Gabriel Marrera, who goes by Gaby and is of Cuban and Panamanian heritage, came to Rose Hill from Miami, where he attended a Jesuit high school. Marrera was considering Loyola University Chicago, George Washington University, Notre Dame and Boston College when he was turned onto Fordham by two high school teachers who had attended the University.

He plans to study finance in CBA. “I might want to be a stockbroker,” Marrera said, “and the fact that I’m in New York will help a lot with job opportunities.”

An avid soccer player, Marrera hopes to get an intramural team together, and possibly try out for the varsity squad. As luck would have it, one of his three roommates, an Illinois native, is also a soccer player and had already unpacked a ball that sat near a desk in their Hughes Hall quad. 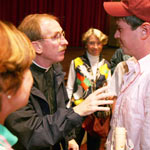 The rainy weather couldn’t dampen the spirits of Fana Tesfagiorgis, FCLC ’10, on her first day at Fordham.
Photo by Chris Taggart

Asked what he will miss about Miami, Marrera didn’t need time to think about the answer. “South Beach! I’m not used to the cold, so we’ll see how that works out.”

The incoming Class of 2010 and their families gathered on each campus as Father McShane formally welcomed them. “We look forward to being your colleagues in the great work of educating your sons and daughters,” he said to the nervous parents in the room. Father McShane told the Class of 2010 to “expect a community of scholars and learners, eager to welcome you.”

Father McShane said in reading the student applications, he was impressed by the intellectual gifts and leadership skills of the incoming students, and touched by the caring families that raised them.

“Of those to whom much is given, much is expected,” Father McShane reminded them, drawing on Luke 12:48. “Work for the transformation of the world, as Fordham works to transform you.”