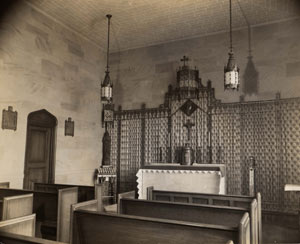 It’s easy to overlook the Keating Blue Chapel on the third floor of what is one of Fordham University’s most iconic buildings.

That would be a shame, however, as the diminutive chapel tucked along a hallway on Keating Hall’s west wing has undergone a major renovation that has restored it to much of its original luster.

Built in 1937, the chapel was designed with faux stone walls, a faux brick ceiling and dark wood details. Its crowning jewel was a stained glass window featuring many shades of blue that bathed the chapel in color, and an ornate hand-hammered Swedish steel altarpiece draped with a blue damask fabric. 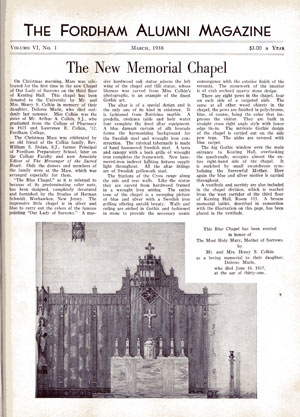 Keating Blue Chapel (above) was a source of great pride for the University when it was built in the 1930s, prominently featured in the alumni magazine. Earlier this year, workers (below) began restoring the chapel to its original specifications, including a faux brick ceiling. Today, the chapel (bottom) looks much the way it did in the 1930s, with faux stone walls and the original hand-hammered steel altarpiece.

In the 1980s, however, the chapel was renovated to conceal damage to the walls and ceiling, said John Spaccarelli, the University’s director of special projects. Wallpaper was hung over the original faux finish and a suspended ceiling was installed, covering the brick design with white acoustical panels. The altar piece was removed and a mosaic icon of Christ was installed behind the altar.

In January, crews began the process of renovating the chapel. The wallpaper and suspended ceiling were removed. The brick faux finish of the ceiling was redone following its original design, with a cross in its center. The walls, Spaccarelli said, were renovated to match the crab orchard stone found in Keating’s rotunda on the first floor.

And the hand-hammered altarpiece?

“I had been watching over it,” said Spaccarelli, who has worked at Fordham for 14 years. “It was stored in the basement of Faculty Memorial Hall and when Father McShane asked where it might be, I told him ‘it’s still here.’”

The altar piece was missing a few gold overlays, which Spaccarelli was able to have recast. It was also missing its original crucifix, so Spaccarelli had it fabricated from two of the chapel’s original candlesticks that were no longer used. The statue of the Virgin Mary now sits in its former location in the front left corner near the altar, which stands on its original Botticino marble platform.

The result, Spaccarelli said, is something to behold.

“It is now as beautiful as it was in the beginning,” he said. 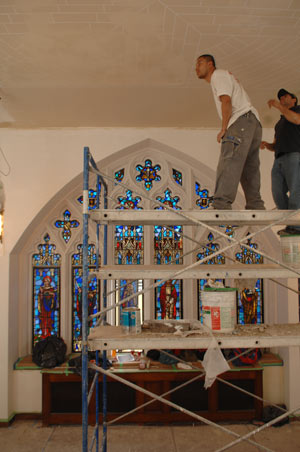 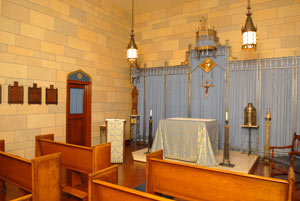 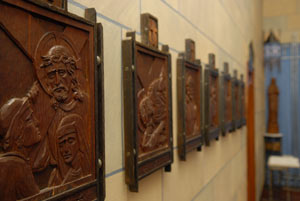