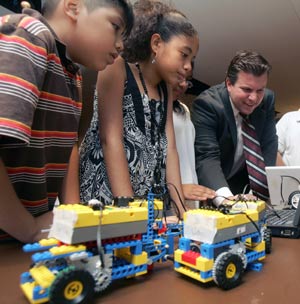 Bronx middle school student Katherine Velez is a math whiz who freely admits she isn’t much of a science fan. But after attending a summer program at Fordham that blended the two subjects, she considers herself a convert.

“I wouldn’t say (science) is my favorite, but I learned a lot,” the 11-year-old said, “especially interacting with the robots. It made science fun.”

Velez was referring to the Lego Robotics MINDSTORMS RCX robot she and about 40 other students from MS 45, the Thomas C. Giordano School, learned to design, build and program as part of the Advanced Math and Science Institute.

The institute is run by the middle school in conjunction with Fordham’s RETC—Center for Professional Development. It featured six weeks of classroom lessons at the school and hands-on technology training at RETC.

“We used concepts from math and science to come up with the program for the robots, which—let’s face it—is more fun than just studying math and science,” DeMatteis said. “The students loved it.”