skip to main content
Return to Fordham University
You are at:Home»Faculty Profiles»Researching the Environment for What it’s Worth

Growing up in Bethesda, Maryland, just outside of metropolitan Washington D.C., Marc Conte, Ph.D., grabbed every chance he could to be outdoors. His love of nature eventually led him to study ecology and economics at Dartmouth College. While he held equal interest in the two fields, a 13-week program to study ecology in Costa Rica and Jamaica convinced him that the pervasive impact of human behavior on natural systems called for active management of those systems,.

“We were in these incredibly diverse ecological systems to study coral reef and tropical forest ecology, but I was most struck by was how human activity affected these systems.” he said. What most interested him, he decided, was how humans respond to incentives that lead to either exploitation or conservation of the natural world.

Conte found a federally funded program supporting interdisciplinary study in economics and natural science at the University of California-Santa Barbara’s Bren School of Environmental Science and Management. There, he burrowed deeper into his chosen subjects and honed his research to focus on environmental public goods and the extent to which markets and policies could support them. He focused on the mapping and valuation of ecosystem services, as a post-doctoral research fellow at Stanford University’s Woods Institute for the Environment 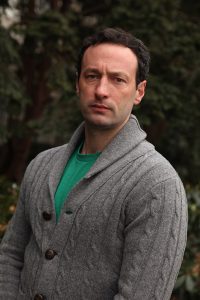 “One of my research interests is in exploring the extent to which policy intervention and voluntary actions, such as charitable giving, are able to provide adequate levels of things like clean air and water, and parks,” he said. One of Conte’s current research projects looks at social information and charitable giving and another project studies the impact of disaster relief on learning about hurricane damages.

His paper currently under review, “Perceived Image, Target Generosity Level, and Voluntary Public Good Provision: Evidence from a Field Experiment,” may have implications beyond the environmental concerns. It closely examines the mechanisms behind the manner in which donors give.

For this experiment, Conte had the cooperation of a conservation group that made a mailing list of nearly 50,000 members available for the project.

Conte sought to determine whether providing donors with “social information” would affect the amount of money they gave. A control group of potential donors were merely asked to donate $300, while a treatment group of donors were encouraged with the phrase “join the top 10 percent of givers by donating $300.”

“”There are two different motivators as to why these people are giving,” said Conte. “One motivation is the desire to be viewed as generous, relative to the rest of the organization’s members, and the other motivation is to ensure that this organization, which has earned the member’s trust, has the resources it needs to achieve its goals.”

“Economic thinking about what determines behavior—be it social norms and/or image concerns—is becoming more sophisticated,” said Conte. “I wanted to conduct this research to see how information about other people’s behaviors might affect individual giving, as charities’ budget concerns are making voluntary contributions essential.

In the disaster relief project, Conte has worked with David Kelly from the University of Miami to measure one’s adaptation to climate change. In a theoretical model of homeowner behavior, Conte and Kelly find that coastal homeowners who receive disaster relief, such as that provided by FEMA in the wake of catastrophic hurricanes, reduce their purchase of insurance coverage. This outcome has two undesirable effects. First, the assistance provided by FEMA is a transfer from inland to coastal residents, essentially subsidizing the purchase of coastal property. Second, government support reduces the financial liabilities of homeowners and insurance firms, leaving them less prepared for future storms.

This outcome is especially problematic as the researchers find that damages from large hurricanes in the United States (Category 3 and stronger) seem to be increasing through time, possibly due to climate change.

Conte said that the policy of disaster relief, which is intended to reduce the burden of hurricane damages on coastal homeowners, unintentionally reduces the ability of these homeowners to learn about the risk that they face from future storms. This, in turn, increases the potential costs of future catastrophic storms.

“Natural and economic systems are individually quite complex. Developing effective policies in areas of the environment, ones which have the potential to increase social welfare through fostering more constructive relationships with that environment, requires a sound understanding of the interplay between these nuanced systems,” he said.