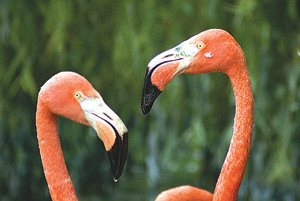 A pair of American Flamingos

For zookeepers around the world, breeding certain animal species in captivity can be a challenge.

The ornithology department at the Bronx Zoo manages a flock of 17 American Flamingos, all of which are young breeding birds but which haven’t seen much action in the love department.

That is because most of the flamingos were raised from birth in captivity and don’t know, exactly, how wild flamingos behave—especially when it comes to breeding. In 2005, one pair successfully raised a chick, but since then, no chicks have hatched even though the flock successfully produced six eggs last year.

This summer Fordham biology professor J. Alan Clark, who has studied bird behavior around the world, and one of his students, devised a plan to help the flamingos “get in the mood” more quickly.

The research team began by studying the literature on the birds, discovering that, as colonial birds, they are motivated to breed through social cues. They then observed the zoo’s particular flock to create a list of 11 potential breeding behaviors, such as preening, calling, head flagging and wing flapping.

Clark and Frink collected a set of six different call types from sound libraries as well as recordings from the zoo’s own flock. Frink loaded them onto her iPod and played them back for the flock during several observation sessions, comparing the birds’ behavioral responses to the various call types. Some of the calls were not very inspiring, but the most successful calls piqued the birds’ interest in those of the opposite sex.

Overall, the results were positive, as Frink observed more head flagging, wing flapping and other social cues with the artificially induced calls. While the flock has yet to successfully produce a second chick, they did begin their seasonal courtships much earlier. In fact, the mean egg-laying date this year—July 6—was 18 days earlier than in 2009. The number of eggs also increased and one pair even found the time to lay a second egg—a milestone for this particular flock.

Carving out time during a breeding season for a second go at laying eggs, said Clark, can be a big factor in increasing reproductive rates.

In May 2011, the Bronx Zoo plans to start using a new speaker system in the American Flamingo exhibit to automate the calls that Clark and Frink developed this year.

Frink was one of nine students from around the country who participated in CSUR, which offers paid opportunities for undergraduate students to gain research experience in biological field studies. The students presented their research on Aug. 19 at Fordham’s Rose Hill campus. 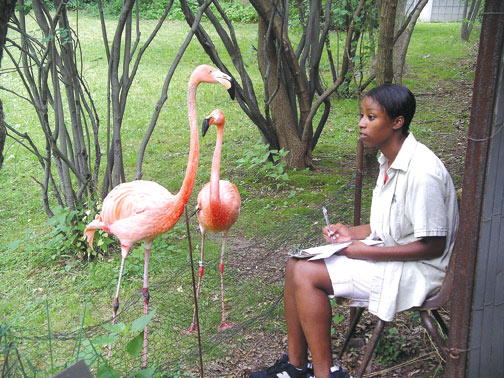