skip to main content
Return to Fordham University
You are at:Home»Faculty Profiles»Researcher Unearths Role of Geologists in Modern Chinese History

History books are filled with stories of powerful figures—politicians, warriors, emperors—staking claim to their territory. 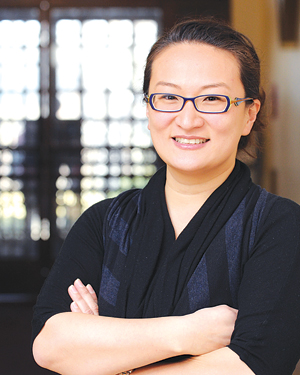 Grace Shen, Ph.D., researches the importance of science in the study of early modern Chinese history.
Photo by Chris Taggart

But in modern China, geologists, with their intimate knowledge of the land, played a large role in literally “unearthing the nation” and developing its new identity.

“They saw geology as the place to take a stand about the Chinese ability to know its own land, and its own nation,” said Grace Shen, Ph.D., assistant professor of history and a researcher of geology and modern China.

Geology’s link to Chinese nationalism grew particularly strong just after the 1911 fall of the Qing dynasty, Shen said, “a period when everything was up for grabs,” and the threat of foreign imperialism loomed.

“Whoever knows a territory can control it, so that knowledge ends up becoming, in many senses, a sovereignty claim,” said Shen.

Most Chinese citizens of that time had never laid eyes on the majority of their vast, disconnected nation. But geologists had. For that reason, Shen said, those with political goals turned to geology to enhance their credibility. They had an advantage over others who “were claiming a unified China, but might never have met someone from Mongolia.”

In her forthcoming book from University of Chicago Press, Unearthing the Nation: Modern Geology and National Identity in Republican China, 1911-1949, Shen expands on her doctoral thesis to explore the “multiple valences of the land itself—as territory, resource, physical environment, and native place,” she writes, and “ways that models of science and nation converged in geological activity.”

Shen’s academic interests have always revolved around science. She majored in biochemistry as a Harvard undergraduate, but in her final semester she switched to the history of science.

“It was one of those moments where the clouds part and the sun comes out,” she said. “I realized I’ve actually been interested in this my whole life.”

She stayed on at Harvard to earn her doctorate in the rapidly growing field. Currently, 59 United States colleges and universities offer graduate programs in the subject, according to the Notre Dame, Ind.-based History of Science Society.

“People are starting to realize as they study modern history that a lot of questions just can’t be separated from science and technology,” said Shen, a Brooklyn native whose parents emigrated from China.

Shen’s studies of history focus mainly on China, though in her undergraduate course Understanding Historical Change: Modern East Asia, she aims to convey ideas that are universal. Her class discusses notions of empiricism, pulling apart “facts” from culture and context to find “something that is trustworthy.”

She also encourages students to imagine themselves in a particular time period, not only as a politician, but as a farmer, an intellectual, or a soldier—“to figure out how all of these people who have no intention of shaping history are actually shaping it.”

When students are new to history and studying a particular trend, she said, “there is a subtle temptation to think that somehow people were colluding to make that happen, as if everyone in the country at the same time was somehow working toward the same things.”

In fact, she said, many people might have been fighting the norm.

This can be especially true in the history of modern Asia, she said, where “students want to see it as a very clear story of how they didn’t have western values, and then they did—and how did they get what they should have had all along?”

But that view does not reflect reality, she said. “It was a struggle for [the Chinese]to want those things. It was not so much a struggle for them to get them.”

Shen also teaches a course on Confucianism, which is popular with non-history majors.

Both courses are popular with students in the Gabelli School of Business, she said, who will likely do business in China one day.

“Certainly China is a region that is of great importance for our students,” said Michael Latham, Ph.D., dean of Fordham College at Rose Hill and professor of history. With course offerings that are increasingly global, including a new minor in Mandarin language, Fordham will soon “be at the point where students can learn a great deal about that part of the world across the disciplines,” said Latham,
“And [Shen] will be a big part of that.”

With more archives and other materials recently becoming available in China, Shen hopes that more students will study Mandarin, and be able to do independent research in the original language.

“The key is on-the-ground exposure,” she said, referencing the opportunity Fordham’s graduate business students have to earn the Beijing International MBA (BiMBA) at Peking University.

“[Visiting China] is such an eye-opening experience, and it changes your level of commitment,” said Shen.