skip to main content
Return to Fordham University
You are at:Home»Inside Fordham»Researcher Uncovers Mysteries of Cell Regeneration in the Eye 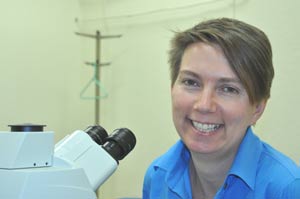 Poets describe them as the windows to our souls. Scientists define them as highly sophisticated sensory organs that send electrical impulses to our central nervous systems.

In both cases, they are eyes. And, according to Silvia Finnemann, Ph.D., each morning when we expose them to light, we set off a chain of activity that occurs with clockwork precision, laying the foundation for the miracle of sight.

Finnemann, associate professor of cellular biology, is the principal investigator on a $3 million study funded by the National Eye Institute (NEI), to look at the regeneration mechanism that kicks in each day when we first open our eyes.

Every human eyeball has a finite number of cells to last a lifetime, Finnemann said. Every night, while we sleep, our light-sensitive retinal cells, which congregate in the backs of our eyes, grow in size by about 10 percent. The new growth leads the cells to dislodge their oldest portion that has been damaged by exposure to the light, shoring up the eye for a new day of light exposure.

So, what happens to this trash heap of used cellular material?

When we open our eyes, our circadian rhythm triggers a different set of cells just underneath the light-sensitive cells, to engulf the old cellular material and “eat” it up.

The name of this gobble-and-gulp activity between the two types of cells is known scientifically as Diurnal Retinal Pigment Epithelium (RPE) Phagocytosis. The trash-eating cells are commonly known as RPE cells.

“You can almost call them gourmet cells,” Finnemann said. “They only eat once a day, in the morning, and they only eat one thing—old retinal cell material. During the rest of the day they do not attempt to eat more. The discipline is essential, because if these cells were to eat more than they should, our eyes would shrink and our light-sensitive cells would likely die.”

But as we age, those “gourmet cells” get old and sometimes malfunction, creating a backup of undigested cellular material ultimately damaging the light-sensitive layer of the eye. The result is Age-Related Macular Degeneration (AMD).

AMD is the leading cause of blindness or partial blindness in the elderly, said Finnemann, affecting about 25 percent of the population over 70 years of age in the United States. AMD manifests itself as a dark spot in the central area of the eye critical to color vision; the area most important for watching television, reading, driving, or recognizing someone, Finnemann said.

“On a cellular level, it becomes a vicious circle,” she explained. “With AMD, waste material builds up in the eye, impairing the RPE support cell’s functions. Then, some of the light receptor cells start to die and neighboring cells have to fill in for them because these cells do not regrow. So if 10 percent of our light receptor cells get damaged and/or eliminated, the rest of our cells have to pick up the work for them.”

In her sprawling laboratory in Larkin Hall, Finnemann oversees a staff of 10 graduate and undergraduate students assisting in RPE research to identify the obscure cellular-molecular mechanisms and how they relate to vision loss. She experiments both in vitro, growing retinal cells in a culture and observing the “gobbling” process in a controlled culture; and in vivo, measuring eye reactivity in rodents. Her in vitro model can directly measure the signaling that occurs between the cells. Those calculations are then confirmed in vivo.

“Mouse and rat eyes are very similar to the human eye,” Finnemann said. “As soon as the light comes on, a lot of things in the body change, and the body knows you are awake.” Therefore, the rodents are exposed to light on a strict time clock—lights out at 9 p.m., lights on at 9 a.m.—to ensure a controlled reaction in the eyes as close as possible to the in vitro experiments. Data from both sets of experiments are then studied.

Since oxidative stress is known to be a contributing factor to AMD, the California Table Grape Commission has awarded funds to Finnemann to test freeze-dried grapes as anti-oxidants in the diets of mice. Already, Finnemann said, studies show evidence that mice on the grape diet develop AMD-like symptoms later than mice in the control group do.

A recent Stimulus Fund award—a $99,000 supplementary NEI grant—has enabled the purchase of an additional laser source for the department’s new laser microscope. The images that it renders, Finnemann said, are so crisp, beautiful and powerful that they make working on eye research especially poignant.

A native of Germany, Finnemann said she knew the first time she set foot in a laboratory that she wanted her own lab someday. “Every morning, I think of something exciting to experiment on,” she said. “At the end of the day, something has happened that nobody knew before, and that is an enormous motivation for me.”

But beyond personal satisfaction, Finnemann values her professional responsibility to her students.

“I seek to introduce them to the exciting part of cell biology that is feeding into medical innovation,” Finnemann said. “Without understanding what is going on, we will never get preventative treatments.”