skip to main content
Return to Fordham University
You are at:Home»Faculty Profiles»Researcher Targets HPV Virus by Delving Deep Inside an Infected Cell

In a lab at Larkin Hall, within a sealed chamber, a deadly virus enters a cultured human cell and
starts to work its way toward the nucleus.

If it follows the usual pattern of viral infections, it will eventually take over the cell, turning it into an engine for making more viruses and infecting other cells.

The virus stalls. The infection stops and the cell survives.

This scenario plays out all the time in the laboratory of Patricio I. Meneses, Ph.D., associate professor of biology, who has spent nearly 10 years figuring out how to short-circuit the virus in this controlled laboratory setting. 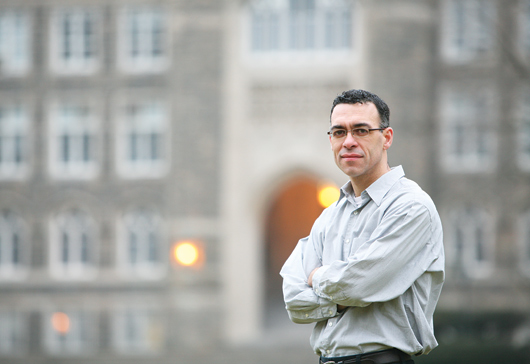 Today, he’s looking for a way to short-circuit it outside of the lab—that is, in people who catch the virus. The result, he hopes, will be a treatment that saves thousands of lives.

Despite the development of HPV vaccines within the last six years, cervical cancer still kills an estimated 250,000 women annually, most of them in the developing world, according to the World Health Organization.

Given these numbers, Meneses is doubly driven: to understand the virus, but also to prevent deaths that often have significant social costs.

“Many of these women are in their early 30s … so not only are we losing these women to cancer, but the family structure is completely destroyed, both at home and in the community, and in the country itself, especially in places like sub-Saharan Africa,” he said. “You’re losing all these women who can make a difference, both in the social structure and the direction of the local environment, the local government. The social impact is huge.”

Two HPV vaccines, Cervarix and Gardasil, counteract the two most common strains of HPV, but not the remaining 13 strains that cause 30 percent of cervical cancer cases.

Meneses is searching for an inexpensive treatment, affordable for those in less-developed countries, that would stop all strains of the virus. He envisions a treatment that’s easy to make and deliver, such as a small molecule—taken in pill form, perhaps—that slips inside an infected cell and prevents HPV from taking it over.

For this project, Meneses is drawing on a longstanding interest in how viruses work. While studying gene therapy as a graduate student in the 1990s, he took part in a study of the use of viruses to deliver genes that would replace genes that were linked to cancer. He pursued postdoctoral study of HPV at Harvard after learning about the virus’s ability to lie dormant in the cervix for years after entering the body.

“The biology of how a virus infects a cell is surely phenomenal,” he said. “It’s such a small agent—the virus is infinitesimal in its size—and yet it can do so much. You may end up working 10 years of your life on a five-minute span of the lifetime of a virus, but that five-minute span is really crucial. A lot happens in that five minutes.”

His research—funded by a grant from the American Cancer Society, and one from the National Cancer Institute—belongs to the field of proteomics, or the study of the makeup of proteins, which are the essential stuff of cells.

Two proteins form the outer shell of the HPV virus, enclosing the DNA within. When the virus enters a healthy cell, these proteins “hijack” the cell’s proteins, which normally move nutrients and oxygen toward the cell’s nucleus, and force them to carry the virus’s DNA instead.

In the course of this takeover, the HPV proteins mingle their amino acids with the healthy proteins inside of the cell.

This is the phase that Meneses is studying. He has found that when he mutates four of the HPV proteins’ amino acids, the virus stalls somewhere in the jungle of proteins inside the cell. To find out exactly where it breaks down, he and his team are conducting a variety of experiments involving these altered HPV viruses, which they manufacture and set loose on cultured human cells.

It’s challenging work because he has to pinpoint the few amino acid interactions that faltered, somewhere amid the thousands of proteins inside the cell. Once he succeeds, however, the result could be a targeted treatment that prevents these interactions and stops the infection.

In taking on this wily virus, Meneses sees new possibilities for advancing our understanding of nature.

“Viruses are the greatest survivors,” he said. “They’ve been around for centuries, and they have managed a way to still be around by adapting. So I think there is a lot to learn as to how nature works in general” by studying them, he said.

Meneses estimates that any breakthrough in his work is two to five years away. He noted, however, that there is another anti-HPV weapon that isn’t used often enough, especially in underdeveloped countries: the simple pap smear, which can detect cervical cancer in its early stages. “If you catch (cervical cancer) early, it’s very treatable,” Meneses said.